The primary issue on appeal dealt with double jeopardy, merger of offenses, and a bunch of other stuff I have long forgotten about since law school. But the case also raised on appeal a rather novel issue regarding juror notes. 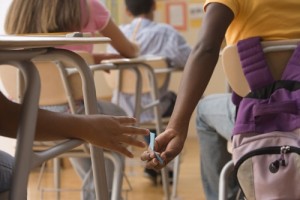 I love juror notes. You spend days trying to read invisible juror tea leaves and then get actual tea leaves of what the jurors are thinking. Yet these are illusory tea leaves. My favorite story was when the jury came back with a single question: “May we see the Plaintiff’s damages board again?“

Are you kidding me? This means I won, probably big. Defense counsel became despondent and his particularly annoying client looked apoplectic. But this news didn’t shock me. I knew I had that jury. The judge who was annoyed with me during the trial because I was objecting to and over arguing everything (who is now retired and became a very good friend of mine), told defense counsel he should really go get more authority to settle. You know where this story is going: defense verdict.

Anyway, in Nicolas, the defendant found a juror note in the record that was never brought to the attention of counsel. After the jury returned with its verdict and had been excused, the note was found with the other jury notes in a single envelope contained within the court file marked “Jury Notes, Filed.” The note would appear to be a good note for the defendant: “Does assault cover physical contact when done in self-defense?”
How did the note get in that envelope? Who knows? It is always amazing to me, for all the effort to get everything on the record, how much does not make it into the record at trial. The biggest example that comes to mind? I‘ll never understand why each sides’ juror strikes are not put into the record unless someone specifically asks.

So the question is what do you do with this mess. The Maryland Court of Appeals decided that the rule that deals with jury notes – Maryland Rule 4-326(d) – is triggered upon receipt by the court of a communication from the jury pertaining to the action at a time before the verdict is rendered. There is a rebuttable presumption, the court noted, of regularity in trial court proceedings. The defense cannot overcome this presumption because it can’t explain how the note got there and whether the jury intended the note to go to the trial judge. I guess the thinking is that it could have been a draft of a note that was never asked or some other similar explanation.

You can read the court’s opinion in Nicolas v. State here.