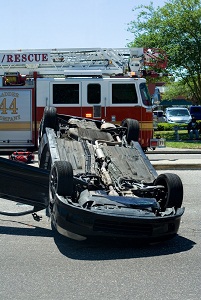 A Clark County, Nevada jury awarded $14.1 million to the family of a truck crash victim killed by a drunk driver in 2001. The jury divided the verdict into $4.1 million in compensatory damages and $10 million in punitive damages that three corporate defendants will pay.   Did you say $10 million?  That was one angry jury.

Rosa Delegado, a 58-year-old grandmother, was getting into her car when the defendant truck driver hit her with a large industrial truck. The impact pinned Delegado against her car, which ran her over. Ms. Delegado’s family’s attorney filed a negligent supervision lawsuit against Terrible Herbst, which operates 80 convenience stores and gas stations in Nevada.

The Plaintiff alleged that the defendant driver had a history of drinking and driving that did not offend the sensibilities of his employer Terrible Herbst. Incredibly, a company supervisor testified that he was not concerned because the truck driver defendant came to work smelling of beer. He further testified on another occasion that the truck driver and another temporary worker asked him for permission to drink beer at lunch. Despite this, the supervisor testified that he did not have reservations about this man driving a truck for Terrible Herbst. Unbelievable.

I did not sit through the trial I am just reading the media’s account. But if these facts are as presented, it is hard to argue that punitive damages are not appropriate. Here, the jury readily agreed to the tune of $10 million.

The View from Maryland on This Verdict

In Maryland, punitive damages are impossible to recover in a personal injury case like this one because the plaintiff must show that the defendant acted with actual malice. Setting the bar even higher for plaintiffs bringing a punitive damages claim, clear and convincing evidence must prove actual malice.  We have one very tragic case now, in 2014, that we think warrants punitive damages and there is a deep pocket to back up the claim. But normally, if you have a tort case that gets you punitive damages, you will not recover that award unless you got rear-ended by John Rockefeller.

The purpose of punitive damages in a case like this is to modify the defendant’s behavior. It is difficult to muster empirical evidence to test whether punitive damages have a deterrence effect because there is no systematic reporting of these damages. Even if there was such data, there are so many other variables involved that could skew the data. The death penalty deterrence debate is a perfect example. So the debate among lawyers, judges, and legislators continues on anecdotal evidence.

Personally, I think this issue differs greatly from the death penalty question because corporations act rationally: they seek to maximize profits and avoid risk. They act in their self-interest to avoid risk. People considering capital offenses are rarely rational and not risk-averse. Punitive damages are necessary in Maryland when corporate defendants show disregard for the safety of people like Rosa Delgado.  We tried in 2012, 2016, and 2017.  We will try again this year.  But it is a tough road.

The crazy thing is that the punitive damages for drunk drivers bill passed the Senate 43-1 in 2016 and we still could not get the bill passed.  The way the sausage is made in making the laws of this country is very depressing.