Late last year, the Maryland Court of Appeals decided yet another “Should we shoot for justice or dwell on the hypertechnical?” case in Lisy 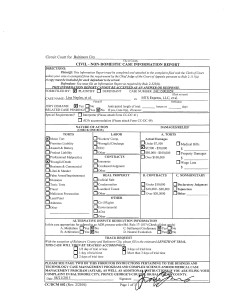 Here, the Plaintiff filed a lawsuit in Howard County alleging both tort and contract claims.  When you file a lawsuit in Maryland, you fill out a Case Information Report (“CIR”) to serve on the Defendant.  A CIR is a three-page administrative form that helps the court process cases. The court is looking to find out things like the nature of the claim and the amount of damages that are sought and, most germane to this case, whether the Plaintiff is seeking a jury trial.

Maryland Rule 16-202(b) makes it abundantly clear that the purpose of the CIR is only case management by the court.  But it is also undisputedly a clear intention by the Plaintiff to seek a jury trial.

The Plaintiff’s attorney asked for a jury trial in the CIR but neglected to file a separate document as required by the rules requesting a jury trial.  So the question in the case is whether a CIR is an acceptable vehicle for demanding a jury trial under Maryland law.

Four years ago, I wrote about Duckett v. Riley, a medical malpractice case seemingly under the exact same facts that ostensibly found that a request for a jury trial in the CIR is not enough to properly request a jury trial.   The motions judge in Howard County, the Honorable Raymond J. Kane, agreed that Duckett was controlling and found that the Plaintiff did not perfect its jury request only seeking a jury trial in the CIR.

Duckett had one important difference. The CIR in Duckett was never served on the Defendant.  The court expressly left unresolved whether the outcome would be different if the Plaintiff served the CIR, with the box checked “yes” for a jury trial, on the Defendant.  Judge Kane acknowledged this but concluded that a request in the CIR was not enough.

Here, the Plaintiff thinks the law gives enough of a thread to honor that presumption because a CIR is a “paper” that requests a jury trial under Maryland Rule 2-235.

Regrettably, the court disagreed and went back to the Maryland Rule 16-202(b) admonishment that the only purpose of the CIR is only case management by the court.

You always want the back story in these cases, right?  Whiteford, Taylor & Preston filed the brief for the Plaintiff with New Jersey lawyers listed pro hac vice.  I wonder who made the mistake in the first place.  Usually, when this happens, it is out-of-state lawyers not well versed in Maryland law or inexperienced lawyers who don’t really understand litigation who make the mistakes.  When I was doing pharmaceutical defense work, I would get so confused practicing in 15 or so states I was covering.   Everything is amazingly different in every state and it is hard not to assume you can do it the way you do in your home state.

A different take on this case is that at the time the court ruled for the Defendant, that was not a bad development for the Plaintiff.  Certainly, this was a legitimate issue or the Maryland Court of Appeals would not have heard the case.  Arguably, the Plaintiff was better served with a judge than a jury, given Howard County juries antipathy for Plaintiffs. (Well, at least personal injury Plaintiffs.)  Having this issue out there gave them another bite of the apple after a loss.  But in the end, that second bite did not yield any fruit. (I will work on my metaphors in 2016.)