Just before the coronavirus shut the world down, the Maryland Court of Special Appeals issued an interesting unreported opinion in a premises liability case in Montogmery Counrty that looks at voir dire in Maryland, an issue that has always interested me in Smith v. Rollins Real Estate.

The case itself is pretty boring. It is slip and fall on the way to a restaurant case.  A woman gets dropped off at the door.  She rolls her foot getting out and blames a separation in the sidewalk.  It is not a case I would ever take.

The Director of Leasing Management says they were unaware of the specific gap that caused the woman to fall. He testified that there were sometimes gaps in the sidewalk because of wintertime freezing and thawing. And, as far as he knew, it could have been there for some time or it could have been covered with a mat. The woman’s counsel had photos of the defect that were admitted into evidence. 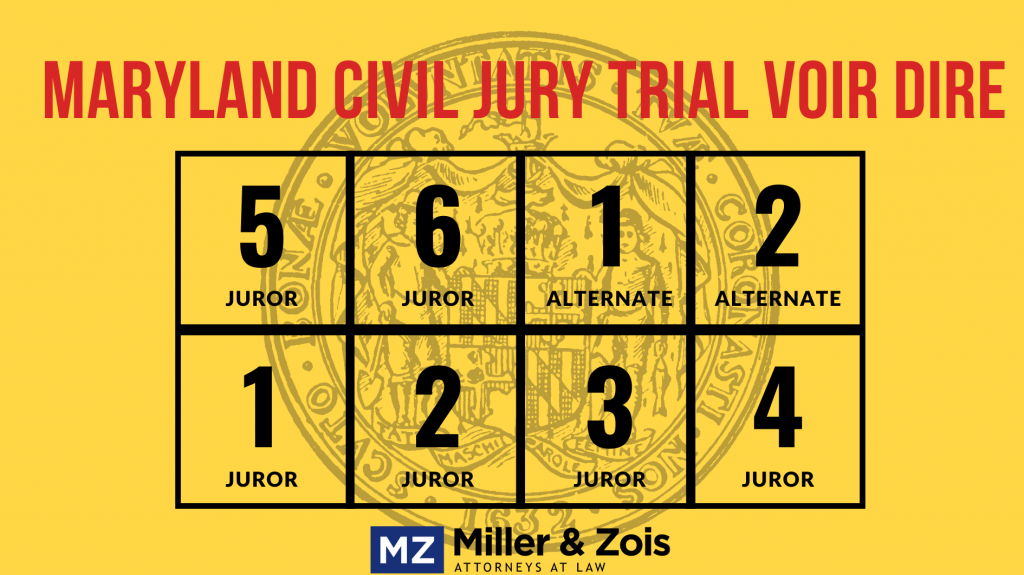 We have six jurors in civil cases in Maryland.

During voir dire, the process for determining if potential jurors are suitable for jury service, sixteen of the potential jurors said that they were familiar with the café. Three of those people were not stricken over objection and served on the jury.

In voir dire, these jurors made statements showing that they ate at the café frequently. One juror, for example, said that they had eaten there several times over the past twenty years and that they currently had leftovers from the café in the fridge at home.

The case ended in November 2018 in a defense verdict. The plaintiff and her counsel appealed the decision. Their appeal was based on the fact that, before the case was tried, they made a motion to strike the three jurors from the panel because of their answers in the voir dire, and the circuit court denied the motion.  This is an unbelievably uphill climb.  Because the appellate court would have to conclude that the court “abuse[d] its discretion in failing to strike jurors for cause who had previously visited the precise location where the Plaintiff fell and were witnesses to a major factual issue at trial.”

Plaintiff’s argument was that:

The plaintiff also cites two cases where judges failed to do proper investigations of the facts. In the first, the judge’s law clerk visited a site under dispute and discussed his observations with the judge—not a good independent investigation. In the other, the judge had a phone conversation with a defendant’s employer and probation officer—not a proper investigation of disputed facts either. These cases are relevant, according to the plaintiff, because the jurors also may have formed their own opinions based on personal visits to the restaurant, which do not constitute a sufficient investigation of the facts.

Maryland’s intermediate appellate court had to decide whether the court erred in not striking for cause the three jurors in question. In the end, the opinion from the Maryland Special Court of Appeals affirmed the verdict, finding that the “appellant failed to satisfy her burden of presenting facts beyond the jurors’ mere association with the Café that would give rise to actual bias.”  The court found that:

This was an unwinnable appeal.  If the appellate court started making these calls, there are towns where you will never get a jury.

The Court of Special Appeals’ opinion leaves several questions unanswered. For example, I find it strange that the opinion relied on the fact that the three jurors were not aware of the specific sidewalk defect that tripped the woman.

I’m sure those jurors were biased by their experience.  We are all biased by our experiences.  But I don’t know how it would break here. I can imagine these jurors who were familiar with the restaurant may have gone a number of different ways in their personal biases. On the one hand, they may have wanted to protect a local restaurant and their landlord from what they saw as unfair charges.  Also, if they hadn’t personally noticed defects in recent visits, wouldn’t they assume, even subconsciously, that they were either nonexistent or very small and not as dangerous as the plaintiff was claiming?

On the other hand, they may have felt terrible that a member of their community got hurt and sided with her, but were not presented with a strong enough case against the restaurant.  They could certainly put themselves in plaintiffs’ shoes easier because they have actually walked in her shoes and realize it could have just as easily happened to them.

What if the judge had struck those jurors for cause and the plaintiff had won?  Would the court overturn that verdict?  Again, I think the answer is no.  The trial court is given a lot of deference in voir dire and the court is not saying it would have made the same call.  All they have to say to affirm the trial judge that a reasonable judge could have made the call.  It is an easy standard, and it generally makes the trial judge bulletproof on appeal.