I sent State Farm a demand package on March 29th. Now, admittedly, I don’t have State Farm “good neighbor” posters in my room, but I’ll give credit where credit is due: State Farm turns demand letters into offers pretty quickly. I’ll tell clients to expect an offer with 60 days, but I’m under-promising and over-delivering – I expect to get an offer much sooner.

Well, it is now almost five months later, and we have gotten nothing but the runaround. So, I got a supervisor on the phone today. He admits the original adjuster is a problem child. To the supervisor’s credit, he read the file in a few hours and called me to argue about it. Usual stuff, he had degenerative changes prior to the accident (setting aside that he had no problems or needed, ah, surgery which he needed after the accident). I’m cool with that; I don’t mind the “your case sucks” banter. The game is the game.

Now, I had not read the guy’s medical records since, oh; I don’t know, March 29th, so I said instead of fighting the details of the merits, why don’t you give me an offer to take back to my client who has been waiting for five months?

Well, he starts screaming at me. Ah, screaming is probably strong, but he is definitely getting fired up. “You don’t want to talk about the merits of the case?” At which point, I said, “Geez, I’ve got one State Farm adjuster who won’t return my calls, and another who is screaming at me.” I was half annoyed and half kidding with the guy because we had a friendly talk earlier in the morning. But he became indignant. Then he told me he was not a claims adjuster, but a supervisor. Now I could be just inflaming this to make for a more interesting blog post, but he seemed so insulted that I would call him a claims adjuster. It was like calling a major a corporal or something. And then I had to get the whole “I dropped everything to do something that is not my job” speech. 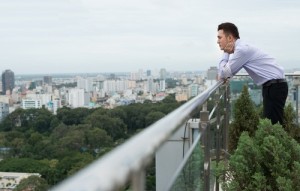 What I do after talking to State Farm.

I think we squared it all up again by the end of the call. He has some legitimate questions. I already got to answers I think will increase the chance of us not filing suit from 5% to like 8%. But I still don’t have an offer.

No, I have no idea what the moral of the story is. Wait, yes I do. State Farm is almost invariably difficult to deal with on personal injury claims and it is hard to resolve a case with them without first filing a lawsuit. Yes, that is the take-home message.