Women experiencing typical pregnancies are not offered the option of inducing labor at 39 weeks.  That might change.

A recent study funded by the National Institutes of Health (“NIH”) suggests that electively inducing labor 1 week before the due date decreases the risk of complications and leads to a safer delivery.  New mothers whose labor was induced in week 39 (instead of waiting for labor to begin naturally) were less likely to require a C-section and had lower rates of preeclampsia and other complications.  The research also established inducing at 39 weeks did not increase the chances of stillbirth or other severe complications compared to mothers who were not induced.  The detailed results of this pivotal NIH study were just published in the New England Journal of Medicine: Labor Induction versus Expectant Management in Low-Risk Nulliparous Women.

It was previously believed that early induction of labor significantly increases the likelihood of an emergency cesarean delivery in response to complications.  This made many doctors reluctant to induce before 40 weeks, but no comprehensive study had ever been done before.  The Pregnancy and Perinatology Branch at NIH funded the study to fill this data gap.

The study involved 6,106 healthy, first-time expecting mothers from 40 different NIH supported hospitals who voluntarily enrolled.  They assigned half of the mothers to have labor induced in the 39th week, while the other half began labor naturally. The researchers then compared the results from both groups by looking at the rate of delivery complications; birth injuries; and emergency c-sections.

The group of mothers who were electively induced in week 39 had significantly lower rates of an emergency C-section.  The mothers who were induced 1 week early also had a much lower rate of maternal blood pressure conditions compared to the natural inducement group.

Cesarean delivery is a safe procedure that may be absolutely necessary in some situations.  However, C-sections are major surgical procedures that involve some level of inherent risk.  Aside from significantly longer recovery times for the mother, C-sections increase risks with any future vaginal deliveries.  This study shows that electing to induce labor a week early can reduce the need for Cesarean sections and lower the risk of other complications. 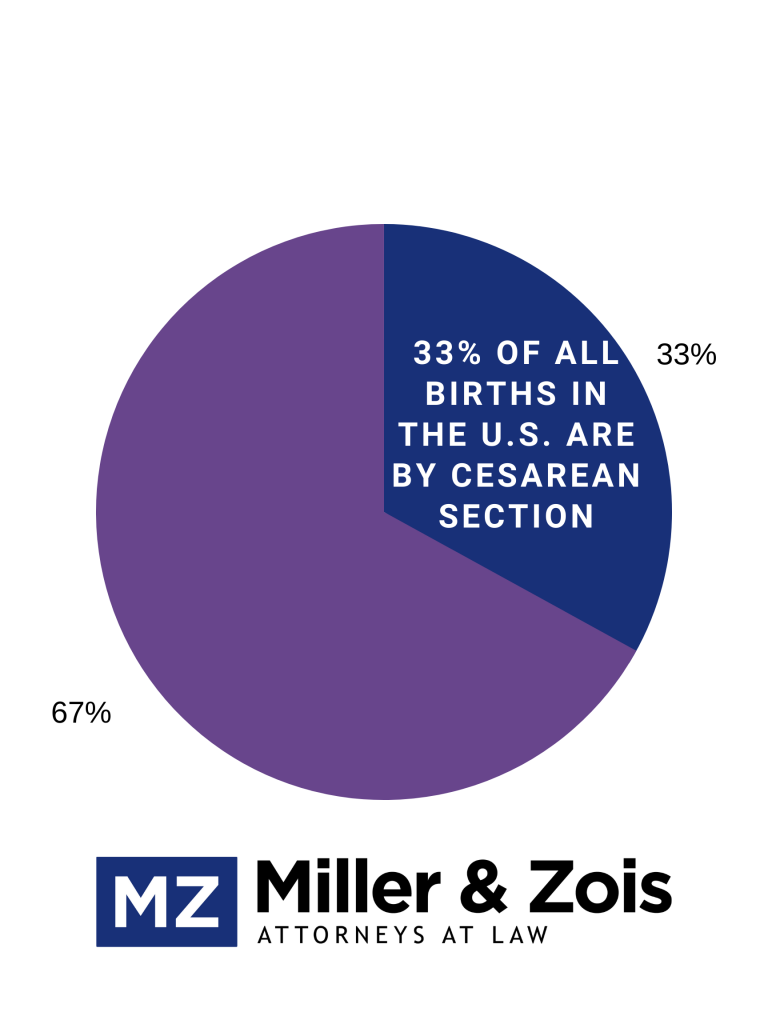 There is very good reason for this.  When certain complications arise during vaginal delivery, performing an emergency c-section is often the only way to avoid injury to the baby.  Being fully prepared to perform an emergency c-section at the first sign of fetal distress is a critical part of modern obstetrical care.  Even short delays in performing a c-section can cause devastating birth injuries caused by a lack of blood or oxygen to the baby’s brain.  A timely emergency c-section can literally be the difference between a baby being born healthy or permanently disabled and confined to a wheelchair. This is why c-section delays give rise to so many lawsuits.  Here are a few recently filed malpractice cases in Maryland involving Cesarean section delays:

Cases such as these show the dangers of not promptly ordering an emergency c-section.  The threat of birth injury lawsuits is frequently blamed for what many perceive to be excessive use of C-sections.  Critics of birth injury litigation claim that doctors are routinely performing unnecessary c-sections because they don’t want to get sued.  Several studies have been done on this topic and they show that fear of birth injury lawsuits has not been a major cause for the increase in C-sections.  A study of Florida hospitals published in 2017 concluded that fear of malpractice lawsuits had no impact on c-section delivery rates and only a small impact on vaginal deliveries after a prior C-section.

But this conversation obscures the real debate in birth injury cases.  Whether there should be more or fewer C-sections is a very different subject than whether a child suffering fetal distress should be immediately removed from an oxygen-deprived environment.