The first lawsuit has been filed over the Indiana State Fair stage collapse that killed six people last week. The suit claims that flimsy stage construction and failure to heed warnings of “severe thunderstorms” caused the injuries and deaths that ensued. 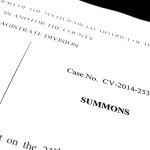 Ultimately, and I have written this before, I think it is hard to gather all the facts and figure out all the defendants in a case like this within a week. Besides getting some good publicity for the lawyers who file the case, I think there is rarely wisdom in racing to the courthouse steps after an accident.