Dan Snyder is easy to mock. I will probably do it in this post. So when he filed his lawsuit against the Washington City Paper for defamation, I instinctively rolled my eyes. So did you. We all did.

Making matters worse, he typified every stereotype of the bullying plaintiff by using the defendant’s trial costs against him, trying to file in New York instead of Washington, with little pretending the purpose was otherwise. Redskins executive David Donovan wrote, “Indeed, the cost of litigation would presumably quickly outstrip the asset value of the Washington City Paper.” David Donovan, you are not helping your boss here.

Wait, I thought you would defend Dan Snyder. That is why I clicked on this post. Just wait. I’m getting there. 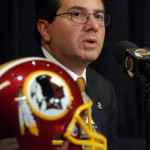 It is worthwhile to hear two sides of the story. The Washington Post let Snyder tell his side of the story today. Although he sued for many “injustices” the one that seems to set Snyder off the most is this line:

“Dan Snyder … got caught forging names as a telemarketer with Snyder Communications.'”
I see his point. If a lawyer at this firm gets disbarred or one of our employees commits a crime, please don’t say I did it. Would I ultimately be accountable for it? Sure. Could you use that fact to attack me? Absolutely. If there are facts suggesting he knew or should have known of the forgeries, then make that point. But when you are writing about it, put it in that context. I don’t think snarky innuendo is necessary.

Look, it is still a dumb lawsuit. First, there are sometimes wrongs that do not have or should not have a judicial remedy. Perhaps more notably, it is just an incompetent public relations move for a man and a team that are not going to be afforded missteps. But… I get his point.