In Stracke v. Butler the Maryland Court of Appeals ruled that a pair of ambulance paramedics from the Baltimore City Fire Department were immune from liability because their actions in transporting a man to the hospital were not “grossly negligent.”

I don’t like the gross negligence law we have in Maryland. I think § 5-604 is well-intended but ultimately foolish.  But I have a hard time arguing that the court did not follow Maryland law.

A 28-year-old man in South Baltimore woke in the middle of the night with chest pains. His fear was, understandably, that he may have a had heart attack. His wife calls 911.  An ambulance is sent out from the Baltimore City Fire Department. A pair of BCFD ambulance paramedics get the call and arrive on the scene within 10-15 minutes. The paramedics take the man into the ambulance where they check all his vitals.

The paramedics wait with the man in the ER.  He complains of chest pains again. After ten minutes of waiting in the ER, the man suddenly goes unconscious and starts sliding out of his wheelchair. The paramedics catch him before he hits the floor and immediately call for help. The paramedics help the ER staff take the man back to the code room where he receives medical treatment. The paramedics leave the hospital and go back on call.

Sadly, the emergency room staff at the hospital cannot resuscitate the man and he ultimately dies soon after the paramedics leave. Initially, doctors cannot identify the cause of death. However, an autopsy later confirms that the man died of a myocardial infarction (i.e., a heart attack).

After his death, the man’s estate files a wrongful death lawsuit against the City and the 2 BCFD paramedics who transported him to Harbor Hospital. The suit alleges that the paramedics did not follow protocol and were negligent in their assessment and transporting of the deceased man to the hospital. The City and the paramedics assert that they are immune from liability under the Fire and Rescue Act – Md. Code Ann., Cts. & Jud. Proc. § 5-604(a) and moves to dismiss.

The Circuit Court rules that the City is fully immune from liability under the statute and dismissing it from the case. The judge determines that the 2 BCFD paramedics are also immune under the Act, as long as there was no willful or gross negligence on their part. Therefore, the case against the paramedics goes to trial to determine whether they acted in a “willful or grossly negligent manner.”

The jury in Baltimore City finds that paramedics were “grossly negligent” in their treatment of the deceased and award $3.7 million in damages. The paramedics move for judgment notwithstanding the verdict, arguing that the plaintiffs had failed to present sufficient evidence to support a gross negligence finding.

The Circuit Court (Judge Althea M. Handy) rules that the City is fully immune from liability under the statute and dismisses the case post-verdict. The judge determines that the two BCFD paramedics are also immune under the Act, as long as there was no willful or gross negligence on their part. Therefore, the case against the paramedics goes to trial to determine whether they acted in a “willful or grossly negligent manner.”

The plaintiffs appeal to the Court of Special Appeals (COSA).  A divided panel affirmed the Circuit Court in part and reversed in part. The COSA unanimously agreed with the obvious: medics are immune from liability except for willful or gross negligence.  The majority found that the record contained sufficient evidence of gross negligence to remove the cloak of immunity.  The COSA determines that there was “significant evidence” to show that the paramedics acted grossly negligent. So the COSA reversed the Circuit ruling and reinstates the $3.7 million jury verdict.

Judge Lawrence F. Rodowsky, a long-time Maryland Court of Appeals judge sitting by designation, dissented.   Judge Rodowsky wrote that only an affirmative act of gross negligence, as opposed to an omission which is what this case is about, can take away the Act’s immunity.  The dissent also found that the evidence was insufficient for a reasonable jury to find gross negligence. 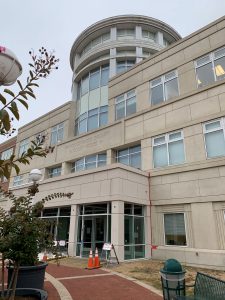 The specific issue before the COA was whether the evidence was sufficient to find that the BCFD paramedics were grossly negligent. The larger issue for the Court to consider was where to set the bar for gross negligence in the context of sovereign immunity. (The court ignored all the acts versus omission debate.)

The Court begins by reciting its definition of gross negligence:

Stracke at 11 (quoting Barbe v Pope, 402 Md. 157, 187 (2007)). The Court further explains that gross negligence in Maryland requires more than just “big negligence.” Rather, to qualify as gross negligence the tortfeasor must act with an intent to injure or utter indifference to the safety of others.

With respect to the actions of the BCFD paramedics in the instant case, the Court held that there was possibly enough evidence to show simple negligence. However, the Court found that the evidence fell way short of the gross negligence threshold. In the Court’s view, there was no evidence to suggest that the BCFD paramedics made a deliberate or conscious choice not to help the deceased.

Instead, the evidence showed that the paramedics promptly responded to the deceased’s 911 call, rendered immediate attention and treatment, and then got him to the hospital in under 10 minutes. Under those circumstances, the paramedics did not act with “reckless disregard” towards the health and well-being of the deceased.

The plaintiffs argued that the paramedics were guilty of gross negligence because they failed to follow various state protocols for emergency medical services and BCFD procedures. The Maryland high court soundly rejected this argument. In the majority’s view, failing to follow protocol only supported a finding of simple negligence and not gross negligence.

Finally, the Court acknowledged that its ruling was also guided by significant public policy implications. In the Court’s view, finding the BCFD paramedics guilty of gross negligence, in this case, would have a major chilling effect on the conduct of first responders. The Court noted that first responders provide vital services to the citizens of Maryland, and those services would be minimized if they were subject to liability and second-guessing.

As a Baltimore medical malpractice lawyer, I am usually in favor of decisions that expand civil liability rather than restrict it.   We have too many laws that restrict a jury’s ability to condemn and value negligent conduct.  So, true to form I guess, I’m against it here. Why didn’t the paramedics do an EKG when they arrived on the scene?  The mistake the jury found was the medics determined the man was a “Priority III” patient with non-emergent medical needs rather than as the Priority I heart attack patient risk.

Your answer might be gross negligence is necessary because paramedics are in an awful spot with very little training.  We have to lower the bar for them, right?  That makes sense.  Until you think about it. All of those things – the urgency, their training, etc. – are all baked into the negligence calculus.   The emergency, the lack of training, all of the context is bundled up in the negligence standard.  What is reasonable depends on all the circumstances.

But… the question is one of interpreting the law.  As I began this post, I dislike the Maryland statute that creates a gross negligence standard.   But we have one.  So I can’t argue with the court’s ruling because I do not think this negligence was gross negligence.