The Life News in Kentucky reported last week the story of a medical malpractice suit brought by a Louisville couple against an obstetrician, claiming the wrongful death of their one-day-old baby girl. Plaintiffs’ Complaint alleges that Dr. Ronachi Banchongmanie delivered their baby girl using “vacuum extractions.” Although the baby appeared pale and had rapid respirations, she was not sent to ICU but sent to the newborn nursery where further complications developed in the absence of emergency care. 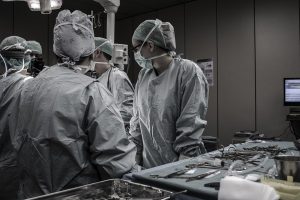 We also frequently encounter frequent flyers from doctors who have often been the subject of malpractice complaints. For example, our firm is handling a case against a doctor in Salisbury, Maryland that our firm has seen many times over again.   We settled a case against a surgeon last year and I have seen his name in three more cases since then.

We have investigated three or four cases filed against this Salisbury doctor in the last few years. It makes you wonder just how many clients have walked into a lawyer’s office and alleged that this doctor had committed medical malpractice.

What is unfortunate is that we rejected the other cases against this doctor because our lawyers believed that while there were medical errors, there were issues as to the number of damages or as to the causation of the victim’s injuries. Now, we have a viable case against this doctor. But most malpractice cases end just this way — a lawyer telling a victim that the injuries might be serious but not serious enough for a medical malpractice case.

What is the likely outcome? We sue him. The client gets a recovery either by settlement or at trial. But and the doctor continues to practice medicine. Sure, he is paying higher medical malpractice insurance premiums. No one is suggesting that this doctor or these other frequent flyer doctors are terrible people, but should we should allow these doctors to continue to harm patients when any reasonable inquiry would establish that they should not be treating patients?

What led me to revise this post in 2019 is the finding that over 9 out of 10 doctors who’ve had five or more successful malpractice claims against them still continue to see patients.  This is a crazy statistic that completely underscores this point that I was trying to make 10 years ago.

Logic tells us that, of the federal government-estimated 100,000 deaths a year caused by medical malpractice,  a tiny subset of doctors cause a disproportionate amount of these deaths. 2019 update: Johns Hopkins tells us the medical malpractice is the third leading cause of death in the United States.  Please, really process that for a minute.)

The take-home message from all of this is that if we could do a better job of policing doctors and weeding out the poor doctors, it would lower insurance premiums and there would be a lot fewer medical error suits in Maryland.  There should a rule that a certain number of malpractice cases — I’ll leave to wiser minds to determine the number — should trigger an investigation.  It does not mean that we assume the doctor is a poor doctor by the mere filing of lawsuits against her.  But it would just lead to an investigation to dig into whether the doctor is fit to practice medicine.