Obviously, there are a lot of vexing injuries that occur in car and truck accidents. Foot and ankle injuries rank high on this list of hard to solve accident injuries. There are so many bones in the foot — one-fourth of all of your bones — and the bones are so small. Just too many things can go wrong. 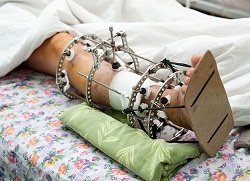 What Is the Average Settlement Value of a Foot Injury Accident Claim?

According to a Jury Verdict Research study, the overall median jury award for foot injuries is approximately $100,000 (maybe slightly less in Maryland).  More serious foot injuries see a corresponding rise in value. Multiple fractures to a foot increase the median verdict to $144,000. In foot injury cases where both feet are fractured, the median rises to $296,940. For plaintiffs’ lawyers repeating the “scope property damage does not matter” credo, it is hard to ignore the conclusion that if you have suffered fractures to both of your feet, you were most likely in a serious accident. Another Jury Verdict Research study found that 39% of the foot injury cases that went to verdict were suffered in motor vehicle collisions. A remarkable 11% of serious foot injury cases were in motorcycle accident cases. This stat underscores how dangerous motorcycles are compared to cars or trucks.

One thing I really suggest in foot injury cases is finding an accomplished doctor with a focus on foot and ankle injuries. Baltimore is uniquely blessed in world-renowned foot surgeons. If you have an orthopedic problem with your foot – from a motor vehicle collision or anything else – take advantage of the abundance of riches we have and get yourself someone extremely well-qualified to chart the best path to recovery for you.

The following are a few examples of foot injury-related settlements and verdicts:

A 40-year-old mechanic at Boeing was a passenger in a rear-ended vehicle. He claimed that the driver failed to yield right-of-way, causing her to collide head-on with a non-party vehicle. The man suffered injuries to his right ankle and foot. Specifically, he suffered pain and swelling to his Achilles. The man noted his ankle became tender, which necessitated future ankle surgery. He now experienced difficulties walking long distances and standing for more than five minutes. The man can no longer wear taller shoes or boots. He received a $5,000 award.

A man was struck while riding his bicycle in the bike lane in Portland. He suffered a traumatic brain injury, facial lacerations, chipped teeth, and collapsed lungs.  He also suffered fractures to his ankle, foot, right hand, pelvis, and ribs. Besides the driver, the man sued the State of Oregon and the City of Portland for the design and maintenance of the bike lane. He claimed that the city and state negligently designed a bike lane that crossed an interstate highway. The man further noted that they were negligent in failing to post signs to warn drivers of a bike lane crossing. This case settled for $350,000.

A minor suffered multiple injuries because of his driver’s negligence. He suffered kidney trauma, head injuries, ankle, foot, right hand, and right tibia. The minor settled with the driver and her husband for $1,250,000. He then settled with his father’s UIM carrier for $120,000. The entire settlement totaled $1,370,000. 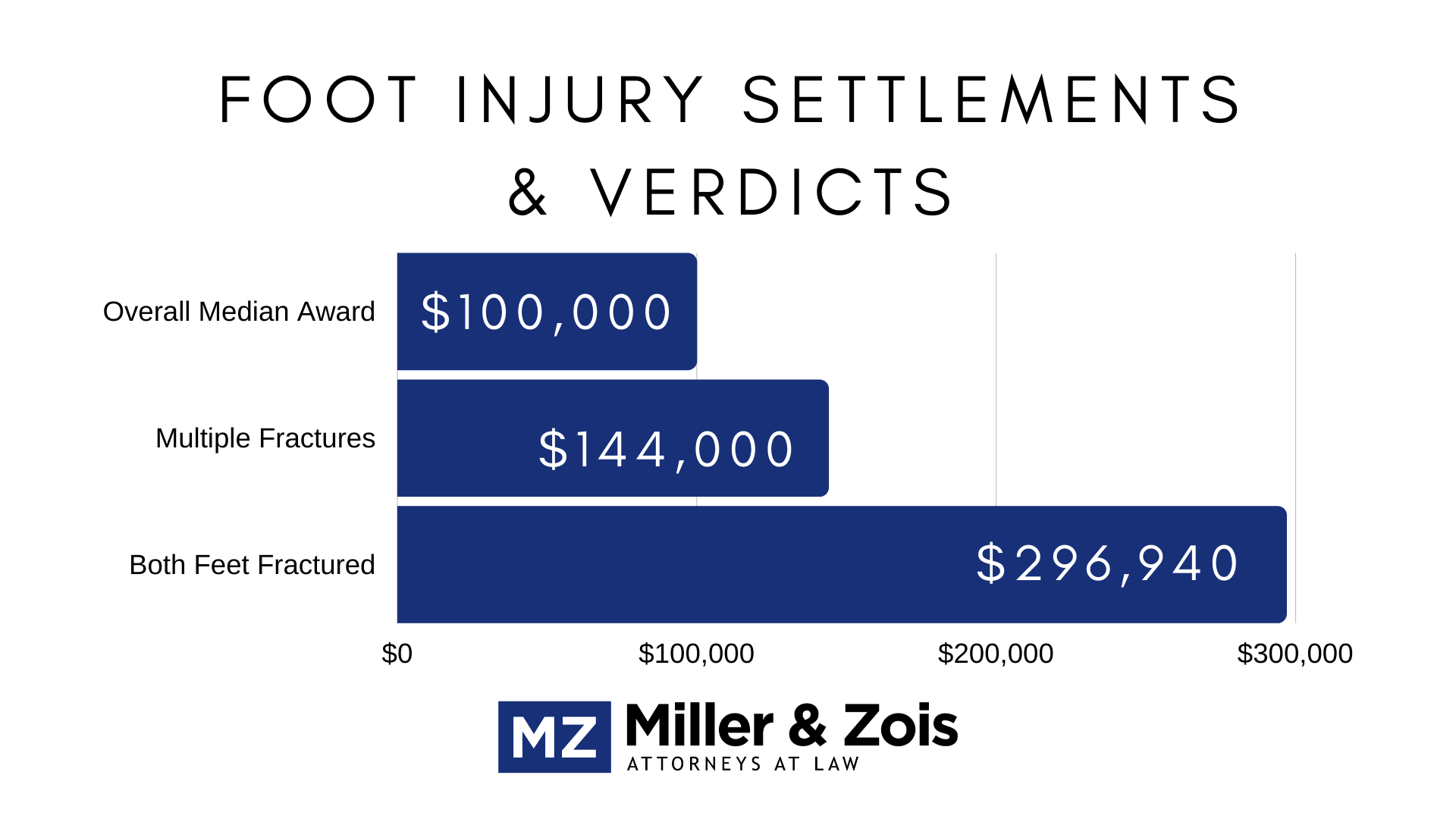 A 49-year-old man was injured on the job as a foreman after being struck by a backing asphalt transfer vehicle. He suffered fractures to his foot, ankle, right tibia, and fibula. The man underwent open reduction and internal fixation surgery to his right ankle. He also underwent a fasciotomy of his right foot and leg. The man also wore a short leg splint for a while. Months later, he would undergo an arthroscopy to his ankle. He noted that he would need fusion surgery in the future. The man sued the truck’s driver and his employer for negligence. He noted that the driver failed to keep a lookout for pedestrian workers and his back up alarm did not make a sound because his vehicle was in neutral. The driver denied traveling in neutral at the time of the collision. This case would settle for $1,207,500.

A double-decker tour bus struck a 50-something New York Times reporter who walked across a Manhattan crosswalk. The bus dragged him for several feet before stopping. He suffered foot injuries and lacerations as well as a fractured shoulder. He underwent ten surgeries to his left foot and one to his shoulder. The man claimed that he suffered permanent pain and would need a brace on his left shoulder for the rest of his life. A jury awarded the man $85,000,000.

A married couple suffered multiple injuries after a cement truck struck their vehicle. The husband suffered fractures to his fingers and ribs. He also suffered a knee injury, a hip contusion, facial abrasions and lacerations, and a neck sprain. The wife suffered multiple injuries to her right foot. Specifically, she suffered a fractured third toe, turf toe to her big toe, and bruising on the top of her foot. She also suffered contusions on her lower abdomen from her seatbelt, which caused a hernia in her left groin. Both of them claimed permanent injuries. The jury awarded a verdict that totaled $2,356,559. This consisted of $1,700,000 in non-economic damages and $99,305 in specials for the husband, and $465,000 in non-economic damages and $92,364 in specials for the wife.

What Is an Open Reduction Internal Fixation Surgical Repair?

An open reduction, internal fixation surgical repair of foot fractures using plates and screws means that the bones and joints are put back into pre-injury position and stabilized. The hope is that repair position will hold for proper healing of the fractures and alignment of joints in anatomical alignment. (The circular fixation method is also an option that has been explored more by foot and ankle surgeons in recent years.

Would You Expect a Discreet Fracture to Have a High Settlement Value?

What is the #1 Thing That Drives the Settlement Value of Foot Injury Cases?

The most important thing that drives the settlement value of foot injuries is whether the victim has permanent restrictions on high demand activities such as walking, running, or standing for long periods of time. If the injuries are permanent, the value shoots up dramatically in most cases.