Last week, the Maryland Court of Appeals decided Falls Garden Condominium Association v. Falls Homeowner’s Association.  It is not a personal injury case. In fact, it’s a case about parking spots. But Falls Garden is actually a 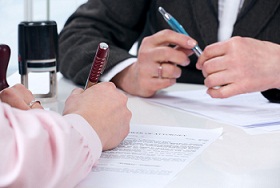 case about settlement contracts and their enforceability.  If you are a Maryland personal injury lawyer, you need to know when a deal is actually a binding deal.

Typically, counsel on both sides of the aisle assume that you have a binding deal when you agree to the numbers on the claim.  Most settlements really do go smooth, particularly in car accident cases.  State Farm, GEICO, and their brethren do not really care about confidentially, admissions, or anything else outside of its standard form settlement agreement.   But malpractice insurers and their doctors and hospitals and product liability defendants often treat settlement agreements like they are reinventing the wheel.

Keep in mind that, as plaintiffs’ attorneys, we never really have those types of things we are trying to slip in under the wire for a settlement.  Our essential term is money and we are not trying to get the defendants to agree to other terms in personal injury cases.

So what this new Maryland Court of Appeals ruling is about is to what extent defendants can impose conditions after settlement and say, “If you don’t like it, we don’t have a deal.”

What This Case is Really About

This case happened because a condo association and a homeowner’s association were feuding over parking spots.  This is because it is a scientific fact that 93.4% of the people involved in condo and homeowner’s associations are stone nuts.  But, after having to resort to litigation, the parties could come to a deal on the key issue of the parking spots. They put together a letter of intent memorizing the deal.  The agreement was silent on whether the agreement was intended to be binding.  But the Plaintiff has a change of heart, fires its lawyer, and gets another one to nix the settlement agreement.  Why?  I don’t know. But remember what I said about these people a minute ago.  Ultimately, both the trial court and Court of Appeals said that the letter of intent was binding on the parties and encompassed the settlement.

Judge Battaglia’s opinion read like a Contracts I Maryland law school exam, explaining the doctrines of “mutual assent,” “materiality,” and the “objective theory of contracts.” But legalese aside, the main question she was tasked with answering was whether both the condo association and homeowner’s association intended to be bound to the letter of intent. She explained two scenarios in which parties would be bound to the letter:

Think about this to help: view the contract (letter of intent) as a car. Think of the parking spot lease agreement as the engine: it’s essential to making the car run, it’s the purpose of having a car. Think of the other terms at issue as the spare tire under the trunk: yeah, it helps to have it, but it’s not necessary to make the car run.  Here, the engine (lease agreement) was in the car (letter of intent), along with the other essential terms, so it was ready to go and was binding on the parties.

So how could this tie back into a personal injury settlement?

In a personal injury settlement, there is really one key term that is “essential” and “material:” defendants pay money so that plaintiffs will drop claims.  So going back to our scenario above, let’s say you agree via telephone to accept $500,00 in exchange for dropping the claim.  I don’t think it matters if it is before or after the suit is filed.  The defense lawyer does not discuss any other term with you when you make the settlement. But you then get the email attachment with their additional terms.  What are those terms? Usually, it is a confidential provision that was not asked for in the oral agreement or maybe some language demanding Medicare or other indemnification.

Under this case, the question becomes whether they are material and essential terms of the deal.  I would argue no.  But unless a case comes out that is on point, I think you have to be careful. This means you don’t stand down by releasing your experts, the witnesses you have under subpoena, and everything else you need to go to trial until you have an agreement firmly in place.

For contract lawyers and especially for students getting ready to sit for the Maryland bar exam, this case is also a great read.  You can find the opinion in Falls Garden Condominium Association v. Falls Homeowner’s Association here.