Two weeks ago in Esteppe v. Balt. City Police Dept., (No. 47, Sept. Term 2020) (Sept. 1, 2021) the Maryland Court of Appeals held that a police department was not responsible for a judgment against a corrupt police detective simply because his unlawful arrest was done for personal reasons and, thus, outside the scope of his employment.

David Esteppe, a resident of Baltimore City, was going through a bad breakup back in 2012. In an effort to get back at Mr. Esteppe, his jilted ex-girlfriend enlisted the help of her childhood friend Adam Lewellen who was a Baltimore City Police Detective. To appease the ex-girlfriend, Detective Lewellen committed perjury to obtain a bogus warrant to search Mr. Esteppe’s house and pursued a false criminal prosecution of Mr. Esteppe. 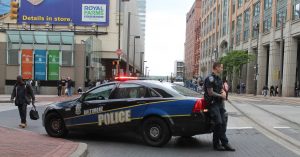 Mr. Esteppe brought a civil lawsuit against Lewellen for malicious prosecution and a host of other related torts. Mr. Esteppe’s lawyers did not name BCPD as a defendant in the lawsuit. Mr. Esteppe was eventually awarded damages in the lawsuit in the amount of $167,007.67.

After getting this judgment against Lewellen in the civil case, Mr. Esteppe’s lawyers sought payment of the judgment from Baltimore City, The City Solicitor’s office refused to pay the judgment, stating that they were not responsible since Lewellen’s conduct was outside to scope of his employment as a police detective. Mr. Esteppe’s attorneys then sought a declaratory judgment ordering the City to pay the damage award under the Local Government Tort Claims Act, Md. Code Ann., Cts. & Jud. Proc. §§ 5-301 et seq. (“LGTCA”).

The Circuit Court (overlooking various procedural flaws) ruled that Lewellen’s actions were within the scope of his employment and, therefore, the City was liable for the judgment against him. The City appealed.

The Maryland Court of Special Appeals reversed the Circuit Court’s decision. The COSA held that the City could not be liable for the judgment under the LGTCA because Lewellen’s acted to further his own personal interests, not those of the BCPD.

The COA agreed with the COSA and held that the City was not liable for the judgment against Lewellen because his actions were outside the scope of his employment as a police detective. The court noted that the standards under Maryland for assessing “scope of employment” in this context are set forth in two principal cases: Baltimore City Police Dept. v. Potts, 468 Md. 265 (2020) and Sawyer v. Humphries, 322 Md. 247 (1991).

The COA explained that under the rule set forth in Potts/Sawyer, to establish that a government employee was acting within the scope of his employment in a tort case, a plaintiff must show that: (1) the acts were in furtherance of the employer’s business, and (2) the acts were authorized by the employer. Both Potts and Sawyer hold that an employee’s acts are outside the employment scope when: they are personal, where they represent a departure from a purpose of furthering the employer’s business, or where the employee is acting to protect their own personal interests.

Both the COA and the COSA held that Mr. Esteppe failed to satisfy the first prong of the test because the evidence showed that Lewellen was acting to further his own interests. His harassment of Mr. Esteppe was not even partly motivated by the furtherance of the BCPD’s interests.

Although the decision, in this case, may seem innocuous, it applies a fairly narrow rule for when a police department can be held liable for the acts of its officers. It’s not hard to imagine how this rule could have unwanted consequences if applied in a different context.

For example, let’s say instead of targeting Mr. Esteppe to impress a girl, Detective Lewellen falsely arrested and physically assaulted (or even shot and killed) Mr. Esteppe because he was African American and Lewellen was an avid racist. Under the legal rule applied by the court in this case, the result would be exactly the same.

The racially motivated assault on Mr. Esteppe would still arguably be “outside the scope of employment” and motivated by personal hatred (not police department interests).  You know the defense lawyer would be citing this very case, right?  A court might just rule that the police department would not be liable for any judgment Mr. Esteppe might get against Lewellen.

Unless the police department is liable, Mr. Esteppe’s judgment against Lewellen is basically worthless because he will never be able to collect on it. Do we really want police departments to be able to sidestep responsibility in situations like this in 2021 after all that has happened? Would it be fair or just to leave victims of racially motivated police violence with no means of getting financial compensation because the officer’s actions were done in furtherance of the police department’s interests?

I would suggest that the scope of employment rule applied in this case should not be applicable in cases where the government employee is a law enforcement officer. Police officers have the unique ability to apply the power of the state for their own selfish and personal reasons. Police departments should not be able to avoid liability when this inevitably occurs.

Anytime an officer uses his legal authority or acts as an agent of the state, the state should be fully liable for those actions regardless of the officer’s personal motivations. The rule applicable to law enforcement officers should simply look at whether the officer’s tortious actions were committed in his role as an officer of the law or under the authority of his badge.