The well-known infant formula Enfamil has recently been the subject of a growing wave of product liability lawsuits filed in courts around the country. These Enfamil lawsuits have been prompted by recent medical evidence establishing that formulas made from cow milk (like Enfamil) are actually dangerous for premature babies because they significantly increase the risk of developing a deadly infection called necrotizing enterocolitis (NEC).

The company that makes Enfamil, Mead Johnson Nutrition, has known about the evidence linking its formula to NEC in premature babies. However, Mead Johnson has refused to include any warning on its product labeling for Enfamil and even marketed it as safe for preemies. Parents of premature babies who developed NEC from Enfamil and died or were permanently harmed are now holding Mead Johnson accountable and seeking financial compensation for their loss.

Enfamil is Dangerous for Premature Infants 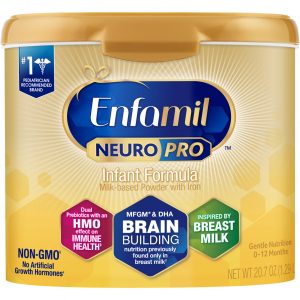 It has recently been recognized by the scientific community that infant formulas made from cow milk are potentially dangerous for premature babies. Decades of scientific research and clinical studies have shown that premature infants who are fed with bovine formulas such as Enfamil are 10 times more likely to develop a condition called necrotizing enterocolitis (NEC).

NEC is a type of gastrointestinal infection caused by very aggressive and dangerous bacteria that can infect the intestinal wall tissue in young infants. What makes NEC particularly dangerous is that the bacteria can rapidly eat away at the intestinal wall tissue causing necrosis and eventually leading to a hole or perforation in the intestine. This can allow harmful bacteria usually contained in the gastrointestinal tract to leak out and infect the abdominal cavity. This eventually leads to a systemic bloodstream infection and death.

It has long been understood that NEC is a condition that is closely linked to infant formula and almost never occurs in breastfed babies. The first clinical study on the link between NEC in premature infants and formulas made from cow’s milk date back to the early 1990s. Over the last decade, scientific evidence has conclusively proven that bovine formulas can cause NEC in premature infants.

Several studies have found that feeding Enfamil or similar infant formulas to premature babies makes them 10 times more likely to develop NEC. This has prompted prominent public health organizations such as the American Academy of Pediatrics and the U.S. Surgeon General to warn the public about the dangers of feeding premature infants with Enfamil or other bovine formulas.

Mead Johnson’s Failure to Warn About the Risk of NEC

Not only has Mead Johnson failed to include any type of warning on the product labeling for Enfamil, it aggressively marketed Enfamil as a safe alternative to breast milk and mislead doctors and consumers. Mead Johnson has refused to include a warning label about NEC on Enfamil because they don’t want to hurt the marketability of the product as a safe alternative to breast milk. Mead Johnson’s failure to warn about NEC in premature infants is at the heart of the legal claims in the Enfamil lawsuits being filed against the company.

Mead Johnson’s failure to warn about NEC in premature infants is at the heart of the legal claims in the Enfamil lawsuits being filed against the company. Around 50 infant formula NEC lawsuits were filed in 2021 and many more are expected to be filed this year. These Enfamil lawsuits are asserting product liability tort claims against Mead Johnson based on negligent failure to warn and strict product liability.

What is the Potential Settlement Value for Enfamil Lawsuits?

There have been no verdicts or settlements in any Enfamil NEC lawsuits at this point as we are still in the early stages of this developing litigation. This makes a definitive value estimate hard, but we can make an educated guess based on recent payouts in medical malpractice cases in which NEC in a premature infant was the primary injury.

The average verdict or settlement payout in a sampling of recent malpractice lawsuits for NEC in premature infants was around $3.5 million. The median awarded in these NEC cases was $1.3 million. These values are probably lower than the potential settlement or verdict amounts we could see in Enfamil NEC lawsuits. The defendants in the NEC malpractice cases were doctors or nurses who probably made honest mistakes. These types of defendants get much more sympathy from juries than big companies (like Mead Johnson).

The product liability lawyers at Miller & Zois are actively seeking Enfamil NEC lawsuits from parents of premature infants who were fed with Enfamil (or another cow milk-based formula) and subsequently developed NEC.