Our clients sometimes incur hundreds of thousands of dollars in medical bills.  They should be compensated for those bills. But the bigger harm in personal injury cases is the physical and emotional pain and suffering that comes with the victims’ injuries.

Today, we will look at average compensation for emotional injuries in an accident and medical malpractice cases to get a better idea of how much money victims can expect to receive as compensation for this type of intangible but often the most important injury.

What Do Statistics Show About Average Emotional Injuries Settlement Value?

What jumps out at you in these numbers? First, they are thirteen years old. Sorry about that.  But I don’t think the trial and settlement values have changed that much in the last 20 years I have been a plaintiffs’ lawyer.  These numbers are probably fair markers in 2023.

The median award is about 12 times less than the average award.

Why is that? The average jury payout is almost invariably higher than the median award because the very large verdicts tend to lift the average.  So the average settlement payout gets more attention but statisticians focus on the median with data like this.

What Is the Value of Emotional Injuries in Wrongful Death Cases?

But the big reason the gap is so wide here between median and average is that there are two kinds of emotional injury lawsuits: wrongful death and non-wrongful death.

Defense lawyers think fothe value of emotional injuries in Maryland for older victims less than it would be for a younger person. That would be true except that we have a cap on non-economic damages in Maryland wrongful death cases. 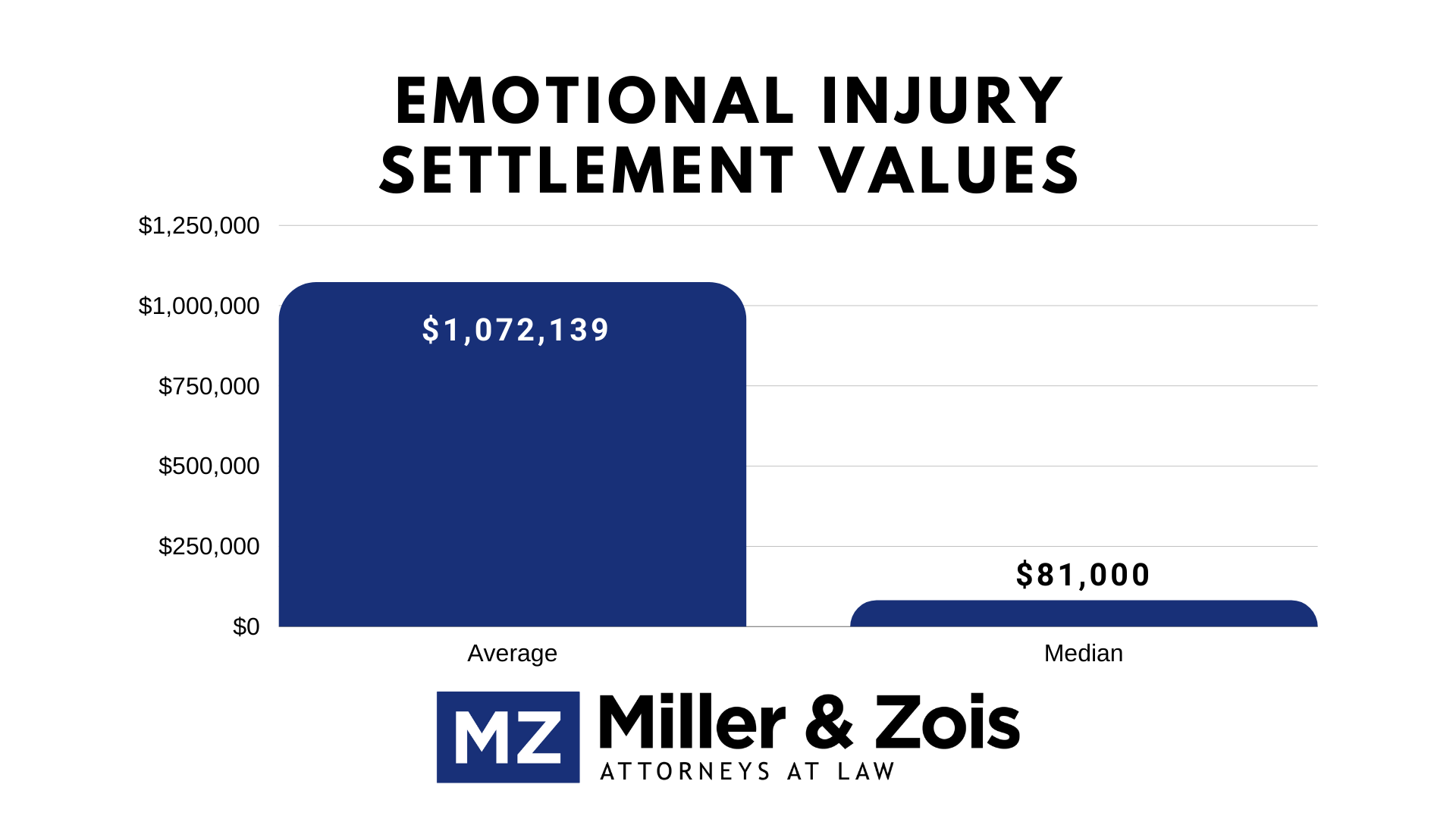 So almost any wrongful death case will get up to the cap on non-economic damages. No defense lawyer will argue to a jury that the death of a person — the loss of whatever time they had left — is less than a million dollars. (Nursing home case update: yes, someone made that argument just last week.) These “sentimental losses” as they are sometimes called, tragically have the same value in Maryland because of our stone ages cap on a jury’s right to award an amount they believe is most appropriate.

What Are the Types of Emotional Injury in Non-Death Cases?

What is the Value of These Types of Emotional Injury Cases?

The value ranges from the pennies to millions. There is probably not an area of case evaluation that has more of a mercurial “it depends” factor than wiis intangible injury. Sometimes, emotional injuries are the bulk of a personal injury claim. In other cases, the payout is almost zero for mental anguish.  People react differently to the same trauma.  The key is how much suffering has been endured, would a reasonable person similarly situated endure that suffering, and whether the plaintiff’s attorney and the victim can adequately convey it to a jury.

In Maryland, to bring the tort of intentional infliction of emotional distress, the standard is whether the emotional injury is so acute that no reasonable person could be expected to endure it.

Maryland courts are strict on these lawsuits.  The evidence must be well-detailed to give the jury a foundation to quantify the injury.  Emotional injury claims also seem to kinda/sorta require that there be an injury capable of objective determination and that the evidence comes from more than just the victim’s say so.  (Our law firm has only handled intentional infliction of emotional distress lawsuits in medical provider sexual assault cases.)

This issue can be summarized as follows: emotional pain and suffering personal injury cases without physical pain are usually a very steep hill to climb.  Don’t get me wrong. These can be very large cases under the right circumstances, again often involving sexual abuse.  But most of these cases fail.

How Much Money Can I Sue for Emotional Distress?

You no longer sue for a specific amount in a Maryland’s personal injury or wrongful death cases Sure, you still see the Baltimore Sun reporting on a $100 million lawsuit but that is from personal injury lawyers looking to get attention.  Maryland law specifically states not to set an amount in what we call the ad damnum clause.