Elmiron, the brand-name for the drug pentosan polysulfate sodium (PPS), is used to treat interstitial cystitis (IC), a chronic and incurable bladder condition. IC, which primarily affects women, causes mild to severe pain and pressure in the bladder area. Having IC is like having a bladder infection that never goes away, and the condition can also cause lower urinary tract symptoms and pain during sex. IC is also known as bladder pain syndrome (BPS). Currently, Elmiron is the only drug approved by the FDA specifically to treat IC, though there are other medications and treatments.

My law firm is now reviewing Elmiron vision loss lawsuits. I think this could be the next big mass tort claim. This is national litigation and our firm is reviewing these cases in every state in the United States. If you have a claim, call our lawyers at 800-553-8082.  You can also reach out to me online.  There is no cost or fee unless we get a recovery for you.

According to Janssen Pharmaceuticals (Johnson & Johnson), the drug’s manufacturer, IC is believed to be caused by damage to the bladder’s lining. Painful symptoms arise because substances in the urine irritate the damaged spots. Pentosan polysulfate sodium, the Elmiron drug, is a blood thinner. PPS seems to attach to the bladder wall, protecting the damaged areas of the bladder wall from outside irritants. In this way, Elmiron is sort of like a band-aid, in how covering a cut with a band-aid immediately relieves pain and prevents it from further irritation.

In recent years, we’ve discovered that Elmiron is linked to maculopathy, a disease of the macula region of the eye. The macula is responsible for sharp, color vision in the center of the field of vision. Maculopathy is one of the most common causes of blindness. Researchers are calling the vision problems that result from taking Elmiron pentosan polysulfate maculopathy (PPM).

What’s new for victims of Elmiron in March 2021?

About 1 million people suffer from IC in the United States. Elmiron was approved by the FDA in 1996, but its effect on vision was only uncovered in 2018. If you’re wondering how this happened, you’re not alone. Didn’t the clinical trials reveal that Elmiron damaged the eyes? Why weren’t patients and doctors warned about this potential effect?

So far, the answers to these questions do not look reassuring. You, as a victim, are owed compensation for the irresponsibility of these pharmaceutical companies. On March 26, 2020, the first lawsuit was filed over Elmiron eye damage. The plaintiff allegedly suffered vision loss.

Filed in Connecticut, the defendant is Teva Branded Pharmaceuticals R&D. The suit alleges that the makers of Elmiron (1) did not warn patients or the medical community about the danger, (2) withheld information from clinical trials about the danger, and (3) failed to take the drug off the market once they were aware of the danger. The drug is still on the market as you read this blog post.

Perhaps the most startling accusation, which we often see in these types of cases, is that there was evidence in one or more of the clinical trials performed before the drug was ever released that showed the possibility of eye damage occurring. It would be upsetting (but not surprising) to discover that these companies would overlook or even attempt to conceal information in order to sell their product.

The next step in these lawsuits was the gathering of Elmiron lawsuits from across the country and the consolidation of the cases into a class action. This has been done and all federal cases are now pending before one judge in New Jersey. 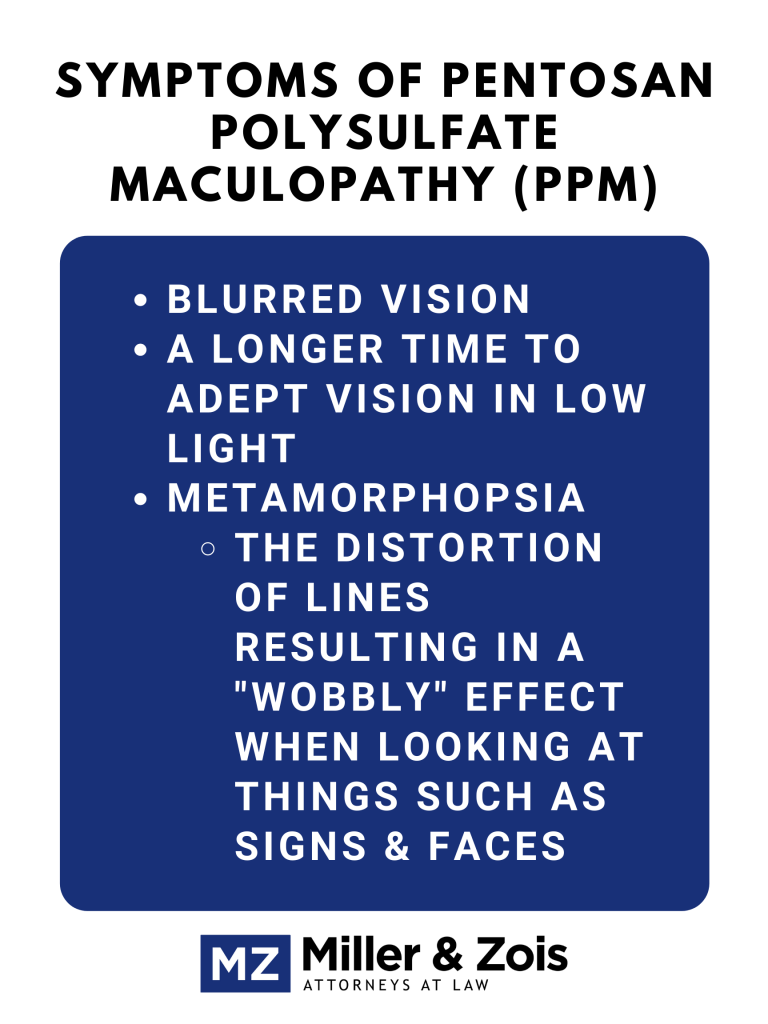 Did the makers of Elmiron know about this all along?

How did it take researchers so long to discover the connection between this drug and vision loss? I’m nonplussed.  One of the reasons why this condition may have been discovered so late is that it requires chronic exposure to the drug. It is possible that it took this long for people to acquire the condition. The condition, too, has somewhat uncertain symptoms and is easily misdiagnosed. Still, 22 years is a long time, right?

But perhaps more importantly, from a legal perspective, did the makers of Elmiron know about the connection and market their drug anyway? This is certainly going to be revealed and will be a crucial factor as lawsuits continue to be filed and lawyers dig into the case.   Our lawyer have our suspicions.  But litigation is going to give the final answer.

Another really important point is that the drug is still on the market. Janssen Pharmaceuticals should have addressed the issue at this point.

What are the symptoms of pentosan polysulfate maculopathy?

If you currently take, or at some point in your life took, Elmiron, you are at risk for vision problems. The most pressing question on your mind is, will I lose my vision? The good news is, according to a recent study, visual acuity is not necessarily affected in patients with PPM. This means that Elmiron is not causing all-out blindness.

However, patients in the study most commonly reported blurred vision, needing a longer time to adapt their vision to low light levels, and metamorphopsia. What is metamorphopsia? From the Greek for transformation, metamorphopsia is the distortion of lines which results in a wobbly effect when looking at things like signs and faces. One study estimated that 24% of people who took Elmiron would experience eye damage; however, this number could be much higher. Clearly, even though PPM does not cause vision loss, it is a difficult and disruptive condition, especially for those who already suffer from chronic bladder pain.

What research has been done to link Elmiron to eye damage?

In 2018, doctors at the Emory Eye Center in Atlanta, Georgia discovered that six patients who were taking Elmiron also had maculopathy. The same damage was observable in most of their eyes and most had trouble with things like reading and seeing in the dark. Could it just have been a coincidence that all these patients with identical eye damage were taking the same medication? It would be a striking coincidence, but to rule out that possibility, the doctors tested the patients to see if their eye damage was caused by something else. They found that none of the six people had a genetic mutation or infection-related variation in their DNA that would explain what the doctors were seeing. The doctors’ suspicions were confirmed, and they published their results with the American Academy of Ophthalmology in November 2018.

However, researchers never make generalizations based on studies with a small number of participants. Larger studies were needed to determine whether Elmiron really caused maculopathy. In October 2019, researchers with Kaiser Permanente in Oakland, California released their much larger study of 91 patients, 22 of whom had signs of drug toxicity. Their findings suggested that the higher the dose of the drug you take, the higher the chances that your eyes will be damaged.

Many more studies are listed in the bibliography at the bottom of this page.

Mass tort lawyers usually see the medical literature turn one way or the other after lawsuits start getting filed.  In these cases, it looks like it is heading the plaintiffs’ way.

In a February 11, 2021 Clinical Ophthalmology-published study, Northwestern University researchers investigated the pigmentary maculopathy presence in Elmiron patients. They searched the university ophthalmology clinic’s electronic health records. The researchers narrowed their search to Elmiron patients who visited the clinic between 2002 and 2019.

The study identified 131 patients. Forty of them had imaging, while the remaining 91 had fundus examinations. The researchers found that five of the 40 with imaging and five of the 91 with fundus examinations showed signs of Elmiron-induced pigmentary maculopathy. The 10 patients with these signs took the drug for an average of 4.2 years at a cumulative dose average of 380 grams.

Based on their data, the researchers concluded that imaging can identify Elmiron-induced pigmentary maculopathy.  This helps plaintiffs in the Elmiron lawsuits because it helps prove the injury was caused by Elmiron.

How does Elmiron damage the eyes?

Researchers have observed that eyes damaged by Elmiron use have over-pigmentation and yellow-orange deposits in the retinal pigment epithelium (RPE). What does that mean? The RPE is a layer of cells in the retina that has several functions, including light absorption. And, the over-pigmentation and deposits are a signal that something has gone wrong.

The mechanism by which the eyes are damaged by the drug is not entirely clear. There is an unknown reaction that occurs between Elmiron and cells in the RPE. This interaction may be because of a “matching-up” in the shapes of the Elmiron molecules and the RPE cells, rather like puzzle pieces.

Should I stop taking Elmiron?

Sadly, discontinuing Elmiron may not prevent eye damage from progressing. A case-study published in 2019 of a patient who had stopped taking the drug continued to have eye degeneration for 6 years.

However, researchers have suggested that stopping the medication may mitigate eye damage. If the damage has progressed too far, though, it may not be preventable. Most importantly, people taking Elmiron should immediately see their doctors and get screened for retinal damage.

The tough part about stopping this medication is that it is one of the only medications used to treat the chronic, untreatable IC condition. There are other medications and treatments available that you should discuss with your healthcare provider, as treatment is best tailored to the individual.

Could I have been misdiagnosed with age-related macular degeneration?

This new type of maculopathy, caused by chronic exposure to Elmiron, was just discovered in 2018. This means that you may have been diagnosed with another condition incorrectly. You may still face that problem if you go to the doctor today because of a lack of awareness about the condition. If you go to the doctor to get your eyes checked, be sure to mention that you take or have taken Elmiron.

PPM may be misdiagnosed as age-related macular degeneration, pattern dystrophy, or another condition.

How do I file a lawsuit? What will these lawsuits look like?

Typically, cases like these involving hundreds of plaintiffs are not handled one by one. Instead, they are typically consolidated under one federal judge. You will file your case in your home state, it will probably end up in a multidistrict litigation (MDL).  We expect all cases to soon be consolidated under one federal court judge. Where? We have no idea at this point.

After lawyers gather information during a discovery period, the judge may hold “bellwether” trials. These are example trials that are used to gauge how much the cases are worth. Most claims will be settled after these trials.

Filing a lawsuit against a pharmaceutical company can be daunting. The Elmiron trials are still in their infancy, and we do not yet know what they will be worth. However, we believe that there is money available to you to make up for the injuries you have suffered. At Miller & Zois, we are experienced in drug mass actions. Call us at (800) 553-8082 or go online for a free consultation.

A study that used a database to look at thousands of people who took PPS. Researchers searched to see if any had a new diagnosis of macular disease. They found that 7 years later, PPS was associated with macular disease.

This study outlines the physical changes observed in the eye when taking PPS. The authors suggest discontinuing the use of PPS.

In this case study, the authors describe a patient whose maculopathy associated with taking PPS was diagnosed as a different condition. This case study highlights the importance of looking at a patient’s history and catching drug toxicity before it causes further damage.

A summary of the most important studies brought this issue to light.

This article, written by the leading scientists who discovered this condition, provides an overview of the science behind PPS and maculopathy, including who is affected. Chronic use, the article clarifies, is needed for eyes to be damaged.