I got tossed from a little league baseball game yesterday.

I know what you are thinking.  Keep your mind open.

My oldest son is 9.  He plays on two baseball teams.  One is a competitive travel team.  The other is a community recreational league team.   The games often overlap and the travel team wins out.   He plays both for all the right reasons. If you asked him why he played two teams, he would say more baseball is better than less baseball.

It is a little more than that. The travel team is competitive both in the quality of play and in tone.  It allows him to get better and face a higher level of competition.  It can come with real pressure. The coaches he played for last year put an insane amount of pressure on the kids.  The pressure also spilled over in the umpires.  Our coaches were sometimes arguing with the umpires before the game even started.  I’m constantly telling my son that we — and by we I mean him and I — do not argue with umpires in words or in gestures of displeasure over calls.  Bad calls are a part of the game.  The umpires are not professionals and will make tons of mistakes just like you will.

His rec team games are pure fun.  In the spring, the kids play under the names of major league teams which encapsulates the goodness of Little League baseball.  It is baseball, apple pie, and Chevrolet.  He has lots of friends on the team.  I am one of the coaches which my son absolutely loves. The kids feel no external pressure from coaches or teammates.  There is an actual sense of community.  I first met some of these kids coaching with or against them in soccer when they were 3 years old.   This is fall ball which is a little different because we play other towns.  But we played rec ball games, and I’ve often coached half the kids on the other team in one sport or another.

In rec ball, there are really great players mixed in with kids that just started playing baseball.  That is just a part of the deal and it is not necessarily a bad thing.

Yesterday, my son’s travel team got rained out.  No baseball!  Wait!  Our rec league team was not canceled.  He was thrilled he would still get to play.  The decision to play two different teams, which often leaves my wife rolling her eyes, was vindicated yet again.

Being a Catcher is Tough

In the last inning, we pitched one of my son’s best friends from school.  He is bigger and stronger than the other kids on his team.  With that comes a fastball that is as quick as anyone in our league. 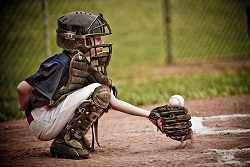 Now, someone has to catch that fastball that comes quick.  For the first time in their baseball lives, nine-year-olds can steal.  They love it!  But it puts a lot of pressure on the catcher.  Coaches and parents invariably expect too much from the catcher.  It is a pressure-filled position now, that also comes with physical fear.  Foul balls are a real risk.  Your proximity to a swung or thrown bat slides back seamlessly between the front and back of your mind.

My son does not play catcher.  Why?  He’s left-handed. Lefties don’t catch.

But this is a lie. Truth is, I don’t want him to face the physical and mental pounding that comes with being a catcher, so I hide him squarely behind the “no, he is left-handed” skirt.  He’s a pitcher.  That’s enough pressure for him. He loves baseball with an unbridled passion.  I’m not eager to do anything to upset that apple cart.  I get unbelievable joy out of his love for baseball.  There is no better sport for father-son bonding. I’m particularly blessed that he is coming of age in baseball at the same time the Baltimore Orioles have shown a real resurgence.  It has been a ride that I thank God for and hope it never ends.

When Are You Going to Get to the Getting Thrown Out of the Little League Game Part?

I know I am taking the dog for a long walk.  Just a little more foundation and we are there.

Umpiring these rec league games can be tough.  You have to have a wider strike zone but it is hard to keep in consistently wide in the same way.  Even the best of umpires struggle with this.  But the coaches really are not as intense as you get in travel ball.  An umpire just has to hear the groans from the coaches and parents when the calls are inconsistent.

It is also physically dangerous, especially when you have an inexperienced catcher trying to catch a kid throwing the ball at 50 miles per hour.   In our game yesterday, the umpire took some real shots.  I reached out to him once and asked if he was okay.  He didn’t really respond. He just grunted something. 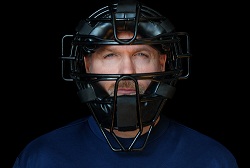 Okay, now to the story.  It is the top of the last inning.  Our pitcher is throwing bullets.  One gets by our catcher and hits the umpire.  I think.  I don’t see him get hit and I’ve got the best view in the house. But I assume that he did. The umpire is angry and frustrated, a little understandable if he got hit with the ball again.  He says in a very condescending tone, “You have to catch the ball, catcher.”

I don’t think he finished the word backstop when I said, “Umpire the game.  Don’t lecture my (yes, I’m claiming ownership, apparently) catcher.”  The umpire responds, “You want to get back here and do this?”  I said, “If you are going to bully my catcher, take off the gear, I’ll be glad to.”

It ends there.  We get out of the inning and start the bottom of the last inning.  I walk out to coach third base.  I can’t help myself.  I’ve gotten a lot more mature over the years, but I couldn’t let it go. “Do you think hollering at a rec league catcher will make him catch the ball any better?”  This really is the wrong question because even if it would help, the umpire still should not be doing it.  But I was hoping for a “Yeah, yeah, yeah, I was just frustrated because I’ve been getting pounded.”  He stuck to his guns which I took to mean “I belittled your catcher and I will do it to the next boy.”   I responded.  I was ejected within 5 seconds.

The funny thing is, I said I was not leaving.  What authority does he have over me, anyway?  Oh, he won’t continue the game until I leave.  I wanted our kids to get a chance to bat.  So I pretended to walk up the hill and then I just walked back down and watched the rest of the game.  It ended.  I admit to immaturely going after the umpire again, but he raced out of there at full speed.  (Before you get the wrong idea, I spotted that guy 3 inches, 30 pounds and 20 years.)  The parents who noticed were supportive, the kids seem mostly oblivious, and the head coach awarded my son the game ball for hitting a “home run” in his only at-bat and pitching great.

I Am a Lawyer Who Represents Personal Injury Victims

I am a personal injury lawyer.  But it did not start that way.  I started out representing mostly large drug companies.  Why?  No reason except money.  It is the fastest way to chase money for a first-year lawyer.

What I did as a young lawyer was to try to bully the little guy.  The goal was to frustrate smaller plaintiffs’ attorneys and their clients by using our overwhelming resources and legal technicalities to defeat them.  This is a bit of an oversimplification but it is a fair characterization.  No one ever stopped to analyze what justice would dictate.  We did not pick our clients.  We just fought with every ethical weapon we could. When a big drug company agrees to drop a boatload of money to you to defend them — at billable rates that are much greater than their medical malpractice or other insurance defense clients are paying —  there are few firms that pause before jumping all over it.  Nor should they, I guess.  Every company accused of harming someone should get a vigorous defense, right?  This is not dishonorable bullying by any stretch.  But it is still a form of bullying which is defined as using superior strength or influence to intimidate or force someone to do what you want, e.g., dismiss your case or settle for pennies on the dollar.  Let’s be honest, too: lawyers on both sides of the aisle are trying to do this. The question ultimately became, who did I want to fight for? 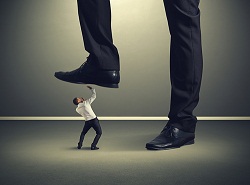 But I loved it at first.  I was flexing my power as a lawyer after spending most of my life as disempowered as any other student. Soon, I realized that litigation is a lot of competitive bullying.  Which is fun.  But I never wanted to be a soldier for the big guy.  I wanted to be a champion for people that didn’t have a voice. That is when I became a plaintiffs’ lawyer.  In many actual ways, I fight for people who cannot fight for themselves, who are being or will be bullied by an insurance company.

Warning: another ridiculous oversimplification here.  I feel compelled to keep it real.  I’m not suggesting people write folk songs about me (although it would be nice).  Before I switched to representing victims, I also sized up my skill sets, which were much more suited to being a plaintiffs’ lawyer, and the freedom that comes without being beholden to large companies.  I’ll never forget how upset a senior partner at my firm was about a catfight between his paralegals and one of the client’s paralegals.  I also had an inability to account for every six minutes of my day which is a requirement of billing by the hour.  If I thought I would be a better lawyer and it would have been more profitable for me as a defense lawyer… I don’t know. I think I would still sit here doing exactly what I’m doing.  But I would have to walk a mile in those moccasins first before I get too high on my horse.

I can say that I enjoy a 1000 times more fighting for the little people against these large corporations than I ever did as a defense lawyer. This is one of the few jobs when you can be against the establishment and still earn a good living for your family.   Trite as it might sound, after 18 months as a defense lawyer, I realized that I would much prefer to give a voice to people who did not have one than trying to beat that person into submission.

Back to That Umpire

This is why I felt so compelled to stand up to that umpire yesterday.  A nine-year-old boy has no power to fight back when he is being ridiculed by an authority figure he did not know.  Should I have let go of it after making my point?  Maybe. I should have at least waited until after the game. I still fear there are parents or kids who thought I was arguing calls. But I have no problem fighting back for a boy who did not have a voice who is being bullied and belittled by someone in power.  I think I’m doing that for our clients every day at Miller & Zois.