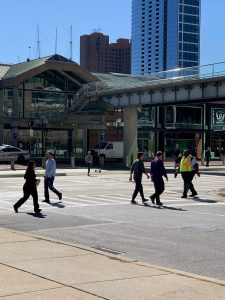 But I was interested in something the player reportedly said to police: “I know I am drunk, but does that mean I cannot walk home?”
I think the first reaction to this report is that we are all glad he made the choice to walk and not get behind the wheel. But walking while drunk is one of the great unmentioned public health problems. According to the journal Injury Prevention, almost 60 percent of fatally injured pedestrians were legally drunk.

In SuperFreakonomics, the authors argue that walking while drunk may be deadlier than driving drunk. On a per-mile basis, a drunk walker is eight times more likely to get killed than a drunk driver and walking drunk leads to five times as many deaths per mile as driving drunk. (Walkers are covering fewer miles than drivers.)