I wrote last week about a bill pending in the Maryland House of Delegates that would authorize punitive damages against drunk drivers who caused “injury or wrongful death while operating a motor vehicle.” For whatever reason, the House of Delegates Judiciary Committee rejected the bill which means it is not happening.

I wrote this post originally in 2012.  In 2018, this bill keeps getting held up.  Last year, Senator Bobby Zurkin and others sponsored a bill that would allow for punitive damages if the drunk in question caused physical injury or death while driving with a BAC of .15, nearly twice the legal limit.  The burden of proof would be higher — clear and convincing evidence — making the burden higher for plaintiffs.  But the bill failed once again.

So the law in Maryland is that victims still cannot get punitive damage against a drunk driver no matter how drunk that driver was or how many people he harmed. 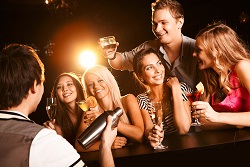 Who opposes punishing drunk drivers?  State Farm.  Their representative told Maryland legislatures that the punishment of drunk drivers is the province of the criminal justice system.  I guess this view is based on the fact that the criminal system is doing such a good job as it is of deterring drunks, right?  I mean, approximately 130 people in Maryland die every year from drunk drivers.

In Zenobia v. Owens-Illinois, the court set out Maryland public policy governing the policy behind awards for punitive damages both for intentional and unintentional torts. The Court of Appeals in Zenobia found that punitive damages may only be awarded in cases where the defendant’s conduct is proved to having an intent described as “actual malice.” What is actual malice?   It means that you had an evil motive, intent to injure, ill will, or fraud.

Drunk driving is not actual malice as defined in Zenobia.  But judges made that law, not the Maryland legislature.  How can we award punitive damages for fraud and not for killing a child because you made an affirmative choice to drive drunk?  It makes little sense and the Maryland legislature needs to step up and do the right thing.

Other states are onboard.  To name just a few: Florida, Minnesota, Virginia,  New Jersey, Wisconsin, North Carolina, Indiana, Kentucky, New York,  Louisiana,  and Mississippi.  There are probably a ton more, this was 5 minutes of research.