Do you need an affidavit/certificate of merit in an informed consent case? Last week, the 3rd Circuit said that you need a certificate under New Jersey law in Mulholland v. 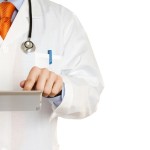 Thomas Jefferson University Hospitals. This blog post is about this case and how the result would likely be different under Maryland law.

Crazy facts. Plaintiff had kidney problems and a co-worker, the unsung hero of the story, offered to give him one of his. Plaintiff had the HHV-6 virus, a herpes virus. Plaintiff alleged that his doctors neglected to tell him he had herpes and how that would affect the risks and benefits associated with the success of the transplant surgery.

That sounds bogus enough. You needed a kidney, right? But the plaintiff further alleged that the donor had the CMV virus. What is the CMV virus? Let’s just say you might have it and not know it. It is easily transmittable but rarely a problem for anyone. But plaintiff argued that if he had been advised by defendants of the donor’s positive CMV blood test result or his own positive HHV-6 result, he would have received a kidney from his wife instead of his co-worker.

So your wife would have given you a kidney, but you took one from a co-worker instead? Did the co-worker know that when he offered you the kidney? Crazy. Court TV needs to do an “Inside the Lines” type story in this case.

Anyway, the plaintiff had problems with the kidney I’ll bet you were not related to the CMV virus. He wanted to bring a medical malpractice case and he or his lawyers tried to get experts. The two experts they found would not sign an affidavit of merit because a donor being positive for CMV is so common that it would not cause an obligation to inform a transplant patient about the risk of infection. (They later found a family medicine practitioner who did not have the expertise to render an opinion.)

The 3rd Circuit affirmed the trial court’s entry of summary judgment, finding that under New Jersey law, an affidavit is a necessary predicate to a lack-of-informed-consent action.

I suspect you don’t need a certificate of merit in filing a medical § 3-2A-04 (“[u]nless the sole issue in the claim is lack of informed consent” . . . claimant must file a certificate). Still, while you may not need an expert on informed consent, one way or the other a plaintiff needs expert testimony on what the risks of the procedure were. Can a plaintiff rely only on the testimony of the defendant or the defendant’s expert to support the plaintiff’s case? That’s a good question I can’t answer. It would be wild to watch this play itself out. What if the expert/defendant provided the testimony but refused to say it was to a reasonable degree of medical probability? It is an appellate case waiting to happen.

Still, for a plaintiff left with no other choice, I think it would all work out somehow. Maryland law does permit calling an opposing party as an expert witness, and I have to think that would extend to the opposing parties’ expert witnesses.

You can find the court’s opinion here. For more flavor on this case, read this District Court opinion.