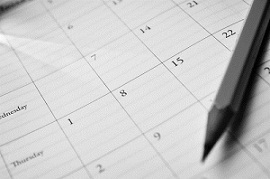 Scheduling depositions in car accident lawsuits usually is not a complex thing. You call the other side; you agree on dates, and you have your depositions. The key is cooperation. Rather than unilaterally serving a deposition notice, you just call opposing counsel and agree to the place, date, and time. There are rare issues.

For some reason, and I’m not entirely sure why, but scheduling depositions in medical malpractice cases always seems to be an ordeal. Common courtesies that I’m sure many Maryland malpractice lawyers accord each other in the rest of our lives sometimes go out the window. Sometimes, it seems like otherwise ethical lawyers have no qualms about making up excuses for why they or the deponents cannot attend a deposition that are not based in fact. Often, you can figure this out when you depose the witness.

Sometimes, judges contribute to the problem by failing to take a stand against flagrant abuses. We had a malpractice case recently where one of the malpractice defense lawyers–who I actually like–blithely ignored efforts to schedule depositions and then did not bother to attend or get a protective order when we have to move to note the depositions. The court let the defense lawyer off the mat and said let’s just schedule these things. I’m not opposed to the sentiment because I would not be eager to get into these weeds if I was a judge either. But at some point, there has to be some punishment for lawyers who open and willing ignore discovery rules.

The Legal Intelligencer has a story about a judge in Lackawanna County, Pennsylvania who imposed sanctions on a malpractice defense lawyer for repeatedly canceling depositions in an infant wrongful death case. The depositions of the defendant doctor had been canceled and rescheduled three separate times from March and April 2014. Even more annoyingly, the plaintiffs’ depositions—remember, two people who lost their child, which is the worst thing in the world—had been scheduled. The morning before the deposition, the defense lawyer sent out an email to plaintiffs’ counsel confirming the depositions. The plaintiffs’ attorney responded and confirmed the depositions. Then that afternoon, they faxed over a letter canceling the depositions. That, my friends, is annoying and, worse, disrespectful to the parents who I’m sure were dreading having to relive the day in any setting, much less a legal deposition.

The special master sanctioned the defense lawyer $1,000. It is not a ton of money, but it sends a message. The defense lawyer appealed. Classic. I mean, it is $1,000 buck, and it was ridiculously fair.

Turns out, the judge, Lackawanna County Court of Common Pleas Judge Terrence R. Nealon, agreed the sanction was wrong. But, he raised the amount to $1,347.

The Plaintiffs’ lawyer was interviewed by the Legal Intelligencer and focused on the costs he had to bear. Sure. But I think the bigger crime was canceling on the parents for no reason at all. Sure, conflicts come up. But an excuse was never offered for the cancellation. Moreover, moving cases forward to trial in the time allowed should not be that hard. But refusing to move forward and making every ministerial thing like scheduling a challenge, is not the path to fair and efficient justice.