A federal court jury in Baltimore found that an Elkton obstetrician was not liable in a medical malpractice lawsuit. The core of the case is bound to raise moral concerns with at least some jurors. Plaintiff claimed she would have ended her pregnancy if they had advised her that her child had Down syndrome, claiming the child’s expected future medical care was projected to be as much as $16.4 million. 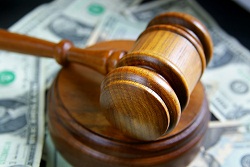 The plaintiff claimed that her triple screen blood test found that she had a 2.6% chance her daughter would be born with Down syndrome. The case was a classic case of he said/she said. The doctor claimed the patient was told three times of her test results and that she rejected the doctor’s suggestion that she get the more invasive amniocentesis test. So really, what this case came down to was a battle of credibility between the doctors and patients.

Most likely, the jury believed the doctor’s notes were accurate and made contemporaneously with his discussions with the patient regarding the results. Only the doctor, the Plaintiff, and God know exactly what information they conveyed. But I also wonder the extent to which this federal jury had a problem with the “I would have had an abortion” claim from Plaintiff. Statistically, someone on that jury strongly believed that abortions are immoral.

But even more to the point, does anyone have a problem with aborting a child because of a 2.6% risk of Down Syndrome?  That was nearly the exact risk that we have with our last child.  I was worried about it.   Then again, have you ever seen a child with Down Syndrome who seemed miserable?    I’ve seen a lot of children without this disease who seem miserable.  But most children who have it seem like happy campers.  I’m not minimizing the pain of having a child who is not normal and the challenges you are forced to face.   Again, I was worried about Down Syndrome with all of my children and I’m sure that “happy camper” talk would have faded and I would have been extremely upset.  But, big picture,  these kids often do really well and are a lot happier than “normal kids” most times.  I have no idea why I’m giving this speech today.

The very notion that someone is standing up in public saying out loud that she would have aborted her own child might also rub even some pro-choice jurors the wrong way or at least make them feel a little squeamish. Maybe those same jurors can ignore their own beliefs/concerns if the medical malpractice allegation is clear. But this is a tough case—albeit with a lot of potential upside—for a malpractice lawyer to win because the jury has a plausible reason to believe the doctor. (Before you send me an email, I’m not injecting my own views on this. I’m just providing legal analysis.)