Jake Brigance gave one of the greatest closing arguments ever in A Time to Kill. This remains true even though Matthew McConaughey has tried to cheapen my memories by making so many “not so very good” chick flicks.

In the actual world, closing arguments rarely sway a jury like Jake Brigance’s did. How rarely? According to David Ball’s recent book, only about 1 in 12 jurors change their mind during a closing argument. This is actually a good thing. It underscores that most juries decide based on how they process the evidence, not which party has the best lawyer orator. 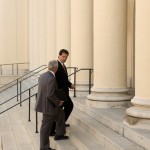 Yet almost every personal injury lawyer goes into a closing trying to convert jurors unlikely to be swayed. So what should a lawyer be doing in closing? Instead of trying to win an argument, the number one job of a lawyer in closing is to arm jurors are with him/her already.

This is old advice that has been around for years. What Ball does is refine this advice, telling lawyers the importance of giving specific verbatim weapons that jurors can use when arguing with other jurors.

If someone says Jamie had back pain before, remind them that “We’re not suing for the back pain he had before.”

Jurors may agree with your client but not be able to find the words to make their argument. Who among has not thought of significant points to make after an argument? It happens to all of us, and it happens to jurors. If you arm the jurors with specifics to defend their position, they are more likely to speak up for your client and stick to their convictions in the jury room.

You can find this in the book on p. 218-219 (section 8-4-1). You will also want to closely read 8-3 which explains how to give the jury the heads up on exactly what you are trying to do in closing. I like this kind of transparency with the jury.