In DRD v. Freed, the Maryland Court of Appeals affirmed the constitutionality of the Maryland cap on noneconomic damages. I was a big Fred Flintstone fan. So when the court in Freed said the cap was “embedded in the bedrock of Maryland law” because it has been around for 17 years, the phrase stuck with me. 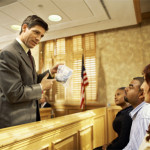 I was reminded of this after a recent trial where one juror asked, “Isn’t there a cap on damages in Maryland?” When I confirmed there was, he turned to another juror (in a nice, familiar way actually) as if to say, “See, I told you.”

As most of you know, a jury in Maryland is not told of the cap on noneconomic damages during the trial. If there is an award in excess of the cap, the reduction is made after the verdict.

But as the cap becomes more “embedded” in Maryland law, public awareness of the existence of the cap will grow. Over time, I think this may depress jury verdicts over the cap, at least to some extent. What scares me is whether jurors understand the critical nuance: the cap applies only to noneconomic damages. My fear is that jurors will start thinking the cap applies to economic damages in catastrophic injury cases in which the economic damages exceed the cap, and that somehow impacts their verdict.