As I have said before, a jury trial is about assigning blame.  The three suspects are the plaintiff, defendant, or “it happens.”  Defense lawyers’ preference is being able to blame the plaintiff.

In medical malpractice cases, the plaintiff often makes choices that put them in the spot of needing treatment or surgery.

The most classic case is a lung cancer misdiagnosis case where the plaintiff smoked two packs of cigarettes a day.  Yes, the guy got cancer because he smoked.  But that does not relieve the doctor of the obligation to see what is there to be seen and uncover his lung cancer if there are signs and symptoms that are there to have been seen.  In Barbosa v. Osbourne, the Maryland Court of Appeals took a more nuanced look at when contributory negligence can be applied to medical negligence cases. 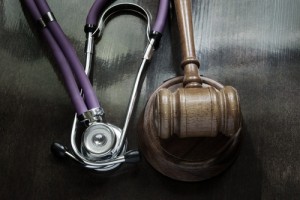 The defendant surgeon performed laparoscopic surgery to remove Plaintiff’s gallbladder. The surgery became very complicated, the doctor said, because advanced scarring had caused Plaintiff’s colon and gallbladder to bind together.  Defense lawyers in lap chole cases always make this type of argument.  Adhesions, scarring, abnormal anatomy… we hear it in almost every case.  Here, unlike many, there might have been some truth to it.  But it does not absolve the doctor of the obligation to know where she is cutting before she cuts.  It is that simple.   So, anyway, the Doctor could remove the gallbladder. But he immediately noticed signs of injury to Plaintiff’s nearby organs. Plaintiff was transferred to the University of Maryland Medical Center where it was discovered that his hepatic artery had been lacerated and the artery had to be removed.

Plaintiff sued the surgeon for medical malpractice,  claiming that the Doctor negligently cut into the hepatic artery during the gallbladder removal. The case went to trial in Frederick County. Defense counsel for the doctor (Jackson and Campbell) mounted an aggressive contributory negligence defense based on Plaintiff’s decision to abandon his emergency room visit the first time. Defense counsel repeatedly argued that had Plaintiff not left the emergency room on June 12, his injuries would have never occurred.

This is probably true.  But the obvious problem with this defense was that it was based on actions by Plaintiff that occurred well before he came under the Doctor’s care. Plaintiff’s counsel repeatedly tried to block the defense but the Circuit Court allowed defense counsel full use of it. The jury eventually ruled in favor of the Doctor, specifically on the issue of contributory negligence.   Plaintiff’s counsel appealed arguing that it was both improper and prejudicial for the Circuit Court to allow the contributory negligence defense.

The Court of Special Appeals Opinion

The COSA noted that appellate courts in Maryland have not addressed the specific issue of contributory negligence based on pre-treatment actions. However, the Court found that both the Restatement (3d) of Torts and case law from other jurisdictions clearly hold that a patient’s pre-treatment negligence is irrelevant to whether a doctor committed malpractice. See Restatement (3d) of Torts: Apportionment of Liability § 7, comment m (2000). The COSA found these authorities very persuasive and adopted the rule that doctors cannot assert contributory negligence defenses based on pre-treatment actions. The Court held that under Maryland law, the pre-treatment negligence of a patient is irrelevant for determining whether a doctor’s medical services breached the standard of care.

My partner and I were trying a case in Prince George’s County a few years back when everything was going right.  The defense lawyer to play his expert’s videotaped testimony which included a ton of objectionable questions that I did not think the judge would let into evidence.  So I started making my arguments.  In the middle, I stopped and said just let it all in.  We would win the trial.  I knew it.  (We got a $1 million verdict.)  So why create an appellate issue?

I think that happened here.  The defense lawyers probably had that jury.  They found the doctor was not negligent. But they could not resist putting up a defense that would clearly create an appellate issue.  And now they have to try the same case all over again.

This decision should effectively limit the ability of defense attorneys to use contributory negligence as a shield in medical malpractice cases. The focus in a medical malpractice case should be on the care provided by the doctor, not whether their patients should have taken better care of themselves.  In the end, this does not differ from the smoking hypothetical I gave at the beginning of this post.   I also believe this is the general rule applied by most courts.  See Harb v. Bakersfield,183 Cal. Rptr. 3d 59  (Cal. Ct. App. 2015) (courts “generally agree that a patient’s conduct prior to seeking medical attention should not be considered”).