I don’t know Ahlers. I know he was a former Howard County police officer who taught at the University of Baltimore School of Law for a time. I’m not floating around in Maryland criminal law circles, but the impression I have is that he is well-liked and well respected. So Ahlers is right, he probably would make a good 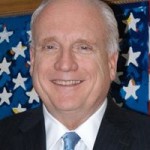 judge. That is not a canned, obligatory throw-away line: I really think he would be a good judge.

But what exactly are the issues in the campaign? Well, I went to Ahlers’ website. He has a category devoted to the issues. Oh good, I thought, let’s see what they are.

There are no issues. There is a lot of talk about the Constitution but, really, are there judges out there running on an anti-Constitution platform? He also wants a new courthouse, and he was in private practice. We devote most of this page to the serious criminal/police cases he has handled. A great resume, but not exactly an explanation of the issues.

Those who favor a purely appointed system of judges believe citizens are too dull to manage their own lives without government’s direction, and are unqualified to select those who would sit in judgement of them.

I think this populist argument is the best arrow in the quiver of judicial elections. But it is weak. I don’t think opposing local judicial elections is a blessing for the notion that citizens are too dull to manage their own lives with government direction. In fact, the connection of the two is – respectfully (hey, particularly respectfully if Ahlers wins!) – intellectually lazy. I can favor having police officers without being in favor of a Gestapo. I can favor taxes without being in favor of socialism. I can favor Joe Flacco without calling him a top ten NFL quarterback.

No one agrees that we should select every governmental position? Should we vote on who should be the Howard County Chief of Police? How about the Superintendent of Schools? Are we so lazy that we don’t care who can arrest us and who teaches our children?

There should not be a campaign without issues. I know there are no actual issues because Ahlers cannot point to any on his website besides supporting the Constitution, and a picture of a courthouse in California that he says the Howard County courthouse should look just like. (Where is the “no new taxes” pledge? Geez.) The reason we don’t want to sort through judges is not that we are dull and lack an interest in who is judging us. Instead, it is that our lives are rich enough that we don’t have the time or energy to sort out who should be a judge. That’s what we hired Martin O’Malley for.

To prove this point, if I were an oddsmaker, I would install Ahlers as a favorite without knowing much about the race. Why? His first name starts with an “A” so he will be first on the ballot.

Ahlers says his effort to win a judgeship is not a reflection on these sitting judges. Instead, he just thinks he would be a good judge. I agree 100%. But that is not a compelling enough case to unseat sitting judges.