Tylenol autism lawsuits have now been consolidated into a new class action MDL. If this happens and the scientific evidence is deemed to be admissible there could eventually be a global settlement to award financial compensation to parents with acetaminophen-related autism.

Our lawyers are currently accepting new Tylenol autism cases across the country from parents of children diagnosed with autism or autism spectrum disorder following high-level use of Tylenol (or acetaminophen) during pregnancy.

END_OF_DOCUMENT_TOKEN_TO_BE_REPLACED

Elmiron eye damage and vision loss lawsuits are now in an MDL class action lawsuit that houses all federal court Elmiron lawsuits.  Our lawyers are seeking new victims who are seeing a settlement compensation payout for their injuries in all 50 states.

Our Elmiron lawyers believe these class action eye damage lawsuits will ultimately result in large settlements and, just as important, a new and strong warning that lets doctors and patients know of the risks of Elmiron.  Our Elmiron lawyers are handling these cases throughout the country.

There is an Elmiron lawsuit that will go to trial in the class action in 2023.  There could be a class action settlement before that trial… or possibly a large verdict that will further ignite this litigation.

END_OF_DOCUMENT_TOKEN_TO_BE_REPLACED

In 2013, the FDA approved the iron supplement Injectafer. This drug is used to treat iron-deficiency anemia, a condition where the body lacks enough iron to produce healthy red blood cells. Shortly after FDA approval, studies revealed that the use of Inectafer could cause severe hypophosphatemia (HPP) in some patients.

As a result, several Injectafer lawsuits have been filed against its manufacturers and distributors. The plaintiffs in these suits allege that the drug caused their severe hypophosphatemia, a condition where the body experiences low phosphate levels. Our law firm is currently accepting new Injectafer lawsuits.

END_OF_DOCUMENT_TOKEN_TO_BE_REPLACED

If someone told any lawyer following mass tort litigation that the next big class action lawsuit would involve a diet drug that causes cancer, the reaction would be “that sounds right.”  Diet drugs have an awful history and we are seeing more and more drugs and products associated with cancer.

Lorcaserin (brand name: Belviq) was “voluntarily” taken off the market last week by its manufactu 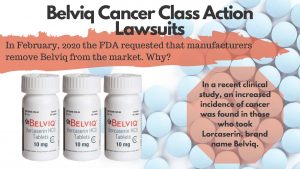 rer at the request of the FDA.

Why? In a clinical study, an increased incidence of cancer was found in those who took Belviq. The FDA recommends that patients talk to their doctors about stopping Belviq. If you were diagnosed with cancer after taking Belviq, call us today to discuss your Belviq cancer lawsuit at 800-553-8082 or get a free online claim evaluation.

END_OF_DOCUMENT_TOKEN_TO_BE_REPLACED

October 9, 2020 Update:  As predicted here 10 months ago,  metformin has been recalled.

The FDA and Health Canada are testing metformin for cancer-causing N-nitrosodimethylamine (NDMA).  If this testing shows NDMA levels far above the FDA’s acceptable daily intake limit of 96 nanograms,  Metformin lawsuits could quickly become a large mass tort claim.  The number of lawsuits if this drug is causing cancer would be astronomical.

We are a long way from that.  The context with metformin, and why everyone should measure twice and cut once when looking at this issue, is this is a medically necessary drug for many patients? No one is suggesting that patients stop taking metformin to control their diabetes (although I think patients should talk about their NDMA concerns with their doctors).

END_OF_DOCUMENT_TOKEN_TO_BE_REPLACED

A mass tort that has been getting a lot of attention from lawyers around the country in recent weeks is Xeljanz blood clot lawsuits.

Xeljanz now has a boxed warning, the FDA’s most severe safety warning, for DVT and pulmonary embolisms.

These conditions can be fatal.  This is a big deal for Pfizer’s blockbuster drug.

END_OF_DOCUMENT_TOKEN_TO_BE_REPLACED

A lawsuit against Gilead Sciences, a prominent drug company known for its HIV medications, has been allowed to continue in federal court after the company filed a motion to dismiss the claims. Although the ruling dismissed some claims against the biopharma giant, it allowed all the core causes of action to continue deciding a decisive victory for the plaintiffs.  There is still a long way to go but these cases may have legs that could take the plaintiffs to victories at trial and ultimately a global settlement for all the victims.

The legal allegations against Gilead involve the company’s groundbreaking prescription drugs used to treat HIV.  In 2001, Gilead developed and released a first of its kind drug, tenofovir disoproxil fumarate (TDF) under the brand name Viread. TDF is a unique antiretroviral medicine that works by blocking an enzyme that HIV virus cells use to replicate and multiply. By preventing the virus cells from replicating, Viread and Gilead’s other TDF drugs stop HIV from growing and progressing into AIDS.

Gilead dominates, arguably with antitrust implications, HIV drugs known as antiretrovirals.  In the U.S. today, over 80% of patients on HIV treatment take one or more of Gilead’s products every day.

END_OF_DOCUMENT_TOKEN_TO_BE_REPLACED 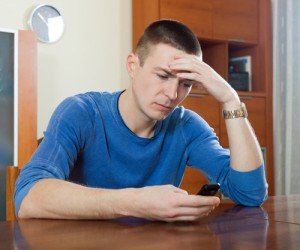 Our Zostavax Trials Set for 2020

Our lawyers are handling Zostavax and Shingrix shingles vaccine lawsuits.   If you have a potential suit and have not yet hired a lawyer, call me.

Zostavax lawsuits are now moving forward quickly. U.S. District Judge Harvey Bartle of the Eastern District of Pennsylvania has selected the initial “bellwether” cases in the Zostavax MDL.  Can COVID slow things down?   Of course it can.  But these cases seem to be moving forward.

END_OF_DOCUMENT_TOKEN_TO_BE_REPLACED

June 2018 Update:  Abilify lawsuits may be very close to a settlement.  There were three cases set to go to trial in the federal MDL.  They are settled.  These cases may settle soon.  If you have not already brought a claim, contact a lawyer as soon as possible.

END_OF_DOCUMENT_TOKEN_TO_BE_REPLACED

I get so many emails from so many marketing companies. Just today I got an offer to write a guest post on this blog (no), an email telling me I rank poorly in Salisbury, Maryland on the search engines (he’s wrong), and two more random emails from companies telling me they are the best in the world at getting me to the top of the search engines (unlikely since, you know, you are spamming me).

But I found one of these emails interesting. This one was from New York City and it offered to provide leads for Actos, Yaz, Yazmin, and Ocella cases. These emails are always flying in, but this one provided the prices for the leads: