Defense lawyers are reluctant to say that the plaintiff is lying. They will insinuate, suggest, intimate, and any other verb you can think of to lead that horse to water, but they will rarely come out and say it. It is largely a trial tactics decision, but it is also because defense lawyers are human. (No, really! It’s true!) It is uncomfortable to call someone a liar or a bad person, so most defense lawyers avoid it. The strategy for many is to turn it over to their medical expert, hoping that packaging it in a white coat makes it more credible. 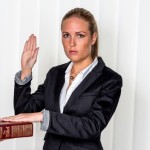 Medical experts should not be testifying as to the plaintiff’s credibility. Under both Maryland and federal law, the credibility of a witness and the weight to be accorded the witness’ testimony are for the jury and, it is “error for the court to permit to go to the jury a statement, belief, or opinion of another person to the effect that a witness is telling the truth or lying.” Stated by the Maryland Court of Appeals: “It is the settled law of this State that a witness, expert or otherwise, may not give an opinion on whether he believes a witness is telling the truth. Testimony from a witness relating to the credibility of another witness is to be rejected as a matter of law.”

Okay, so experts can’t say the plaintiff is lying. But if the expert wants to say that, should you stop him? Lawyers often want to stop the other side from doing something at trial because they can. This is the logical underpinning of about 80% of objections at trial. But, there is a really good argument to let the expert, a strategy well articled by Rich Friedman in the book Polarizing the Case. You can read more about this strategy here.