Our attorneys are handling Camp Lejeune lawsuits in all 50 states.

Marines and their family who lived at Camp Lejeune may have been exposed to contaminated drinking water between 1953 and 1987.   There is solid evidence that this toxic water caused people who ingested it to develop cancer and other health complications.

Victims has been denied the right to seek compensation for their injuries.  Marines fought back of the course of many years for justice.  Now, finally, justice is at hand.  A new law allows Marines and their families to file a Camp Lejeune lawsuit and seek settlement compensation.

Camp Lejeune is a massive Marine Corps base and training facility on the North Carolina coast. Few Marines have never been to this military base at some point.

Camp Lejeune was opened in 1942 and over a million men, women, and children have lived and worked on the base over the years. Unfortunately, these former residents and employees may have been exposed to harmful, cancer-causing chemicals in the Camp Lejeune water supply.

In the 1980s, the Marine Corps discovered that the drinking water supply for the Camp Lejeune military base was dangerously contaminated with very high levels of carcinogenic chemicals. The chemicals in the contaminated water included perchloroethylene (PCE), trichloroethylene (TCE), and benzene. All 3 have been shown to cause specific types of cancer. 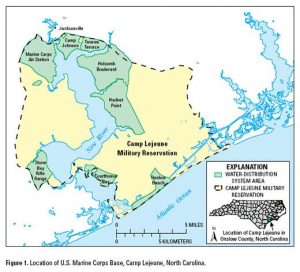 The truth about the water contamination at Camp Lejeune was covered up for years. When former residents of the base eventually did learn about it, they brought civil lawsuits against the government for compensation. Nearly all of these plaintiffs were denied the right to sue, however, under North Carolina’s strict 10-year statute of repose.

After their civil lawsuits were dismissed, victims of the Camp Lejeune water contamination (most of who were former Marines who honorably served their country) began pushing for legislative change at both the state and federal levels. Eventually, this group convinced Senator Thom Tillis (R) of North Carolina to introduce a bill in Congress called the Camp Lejeune Justice Act (CLJA).

The CLJA proposes to allow the Camp Lejeune victims to circumvent the North Carolina statute of repose and bring tort lawsuits in federal court for injuries sustained from the contaminated water. Under the CLJA, anyone who lived or worked at Camp Lejeune for 1 month or longer between 1953 and 1987 would be eligible to file a lawsuit in the Eastern District of North Carolina. These victims would then be able to pursue compensation for any injuries that can be traced back to the contaminated water at Camp Lejeune.

Earlier this year, the U.S. House of Representatives passed the CLJA by a vote of 256 to 174. Of the 256 members voting in favor of the CLJA, 222 were Democrats, and 34 were Republicans. The CLJA is now up for consideration in the U.S. Senate. In order to become law, a majority of the Senate must vote to pass the bill.

Will the Senate Pass the Camp Lejeune Justice Act?

The question on the minds of many Camp Lejeune water contamination victims is whether the Senate will vote to pass the CLJA as approved by the House. Most political observers are predicting that CLJA has enough bipartisan support to pass and a vote may come next week.

Support for the CLJA in the House enjoyed only limited support from Republicans. Getting 68% of the votes in favor of passing the bill in the House came from Democrats. This would suggest that the bill may have a hard time passing in the Senate where the Democratic majority is razor-thin, but several prominent republican Senators have already publicly announced their support for passing the CLJA.

The CLJA was introduced by a Republican Senator from North Carolina. Moreover, one of the biggest advocates for the CLJA (on either side of the aisle) has been Senator Marco Rubio (R) of Florida. Rubio is one of the Republican party’s leading stars and he has been vocally advocating for the passage of the CLJA. Like him or hate him, Rubio has a history of fighting hard for veterans.

After a long history of back and forth, President Biden signed the new law on August 10, 2022.

If you lived, served, or worked at Camp Lejeune military base in North Carolina between 1953 and 1987 and you were later diagnosed with cancer, a neurologic disorder, or any other type of disease or health condition that you think may have been caused by contaminated water, contact our office today at 800-553-8082. Our national mass tort lawyers are evaluating Camp Lejeune water lawsuits for victims like you who suffered injuries or lost a loved one.