Earlier this month, I wrote a blog post about Vermont Senator Patrick Leahy’s proposal to allow retired Supreme Court justices to hear cases to avoid 4-4 splits in conflict situations, an issue that is getting attention because of the conflicts that Justice Kagan has for many pending cases. 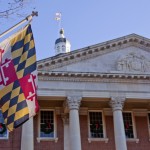 The Maryland Court of Appeals has been doing this effectively for years, I wrote in the blog post. But while writing a blog post today on underinsured motorist lawsuits involving State Farm, I looked at the Maurer v. Penn National opinion from the court in 2007. I noticed something in the opinion: four of the judges were retired when the opinion was issued. We all follow Maurer as the law (2013 update: not anymore, the legislature stepped in) but only two of the seven judges currently on the court – Judge Greene and Judge Harrell – took part in this opinion that is not yet three years old.

For those of you who are not lawyers, stare decisis is doctrine the Maryland Court of Appeals has applied with vigor: following prior court decisions unless there are very compelling circumstances. It means that a prior ruling being “wrong” is not alone grounds for reversal. I think every court in the country relies on this doctrine, to varying degrees.

So I think it may be a concern that decisions are made by a revolving door of judges when the court relies so heavily on stare decisis. Admittedly, “revolving door” is a little hyperbolic but if judges are restrained by stare decisis – a point this court repeatedly makes, calling a 17-year-old law “embedded in the bedrock of Maryland law ” – should there be concern?

I Googled this theory before posting this and I have found no one who has ever raised this concern in Maryland or in any other court. I’m not bold enough to suggest a change in the current process because I don’t pretend to be an appellate scholar. I’m just throwing it out there because I have it on good authority that Judge Bell and many other Maryland Court of Appeals judges read this blog daily. (Okay, not really.)