The “burden of proof” is a legal concept that establishes two things:

The applicable burden of proof can have a major impact on whether a case succeeds or fails.

If you are a party in a legal proceeding and you have the “burden of proof,” you will need to produce and present enough evidence to prevent your legal claims from getting dismissed or rejected. In most adversarial legal proceedings, the party that initiates the case (usually the “plaintiff”) will be subject to the applicable burden of proof. Evidence used to satisfy the burden of proof can be in the form of documents, witness testimony, expert opinions, and other things.

Burden of Proof in Civil vs. Criminal Cases 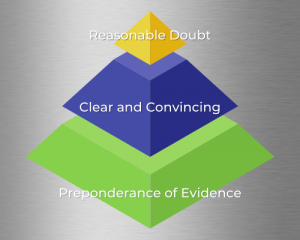 So what exactly does “preponderance of the evidence” mean? It means that plaintiff must convince the jury or judge that there is more than a 50% chance that their allegations are true. In other words, the fact finder must be convinced that it is “more likely than not” that the defendant was negligent and caused harm. Preponderance of the evidence is one of the lowest burdens of proof in our legal system (i.e., the easiest to satisfy).

The burden of proof applicable in criminal cases is much different. The state bringing the criminal prosecution always has the burden of proof. This is where the concept of “innocent until proven guilty” comes from. Defendants accused of a crime are not required to prove their innocence. Rather, the state is burdened with proving guilt.

The burden of proof in criminal cases is much higher than in civil cases. In criminal proceedings, the prosecution must convince the jury “beyond a reasonable doubt” that the defendant is guilty. The “reasonable doubt” standard applicable in criminal cases is the highest burden of proof in our legal system. It requires the prosecution to support their criminal charges with a much more convincing level of proof than compared to civil cases.

Juries Misapply the Burden of Proof in Civil Cases

In a civil case, jurors want to apply the criminal burden of proof.  Why?  Because television is largely about criminal trials and most jurors grew up on the idea of guilty beyond a reasonable doubt.  Jurors need to be educated on the civil burden of proof.  If lady justice has two equal weights, a feather added to the plaintiff’s side requires a verdict for the plaintiff.

Plaintiffs’ lawyers need to get this out in opening statements so jurors and not filtrating evidence with the wrong lens throughout the entire trial.

In the U.S. legal system, there are basically 3 different burdens of proof levels that can be applicable in a case. The higher the stakes are in case the tougher the standard of proof becomes. The chart below lists the 3 basic burdens of proof standards (as they are commonly described) and where they usually apply.

Ø  Preponderance of the Evidence: lowest standard that requires evidence to show that claims are “more likely than not” or greater than 50%. This standard applies to civil cases where only money is at stake.

Ø  Clear and Convincing: the clear and convincing evidence standard is a step above the 50/50 preponderance burden. Instead of “more likely than not” this requires evidence to show “high probability.” This standard is often applicable in cases where more than just money is at stake.

Ø  Beyond Reasonable Doubt: this is highest burden of proof standard that is the hardest to satisfy. It is generally reserved for criminal cases where the defendant’s life and freedom are at stake.

FAQs – Burden of Proof and Why it Matters

What Does Preponderance of Evidence Mean?

Preponderance of the evidence means there is proof to show that allegations are “more likely than not” or greater than 50%. This is a low evidentiary standard usually applicable in civil cases where only money is at stake.

Who Has the Burden of Proof in a Personal Injury Lawsuit?

The plaintiff who sues has the initial burden of proving that his or her allegations against the defendant are true based on a “preponderance of the evidence.”

Is “Clear and Convincing” a Higher Standard Than “Preponderance of Evidence”?