The Maryland Daily Record is reporting that Governor O’Malley today named Robert N. “Bob” McDonald to the Maryland Court of Appeals. Soon to be Judge McDonald is the chief counsel of the Opinions, Advice and Legislation Division in the Office of the Maryland Attorney General where he has been for 15 years.

McDonald writes or edits all formal opinions of the Attorney General’s Office. I don’t have occasion to read many Attorney General opinions and, even if I did, I don’t think it would be a great lens to predict how McDonald will vote. Ultimately, the AG is making the call on those opinions. 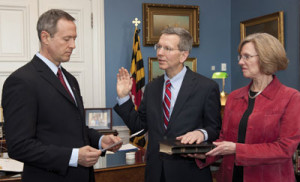 There are a lot of 4-3 decisions by the Court of Appeals. I have no idea how this will affect that court and I doubt many people do.

I had this all wrong. I thought for sure O’Malley would pick Judge Grimm. I even gave odds on it. If he did not pick Grimm, I thought he would pick someone very young. I don’t know how old McDonald is, but he graduated from law school (from Harvard) in 1977. I also would have bet money that the choice would be a judge. Three strikes. (The take-home lesson: don’t handicap when you have no idea what you are talking about.)

O’Malley also elevated Baltimore City Circuit Court Judge Stuart Ross Berger to the intermediate Court of Special Appeals, succeeding Ellen L. Hollander, who took a seat on the U.S. District Court in Baltimore. This selection is not a surprise.

November 5, 2012 Update: A lot of folks are Googling Judge McDonald now as good citizens to see if they should support him on the ballot. Our election of appellate judges is very Stalinist – they have no chance of losing. (I say Stalinist lovingly; we should not be “electing” appellate judges anyway.) But, if you are still interested in learning more about this new judge on our high court, here are some substantive opinions of Judge McDonald since taking the bench: