This week I was reading through recent appellate decisions from birth injury cases across the country and I came across a unique written decision from the federal court in Chicago in Zhao v. United States 2019 WL 3956412 (S.D. Ill. 2019).

This was a fairly typical birth injury case in which the baby suffered nerve damage because of a failure to diagnose fetal macrosomia and the mishandling of shoulder dystocia during delivery. What makes this case somewhat unique is that unlike most birth injury cases that get tried by juries, this case was resolved with a bench trial in the U.S. District Court for the Southern District of Illinois (because it was against the United States in this case).

At the end of the trial, the judge awarded the plaintiff $8.2 million in damages, but more importantly, he wrote a very detailed Memorandum and Order analyzing the entire case.

When juries reach a decision, they don’t issue legal opinions or give any meaningful statement explaining how they viewed the case and reached their decision. At most, we get worksheets or answers on jury instruction forms. This means that we often have to speculate how the fact-finder viewed the evidence in the case. The memorandum in this bench trial gives us a peek behind the curtain which can help understand exactly how this particular judge viewed the evidence in this birth injury case. 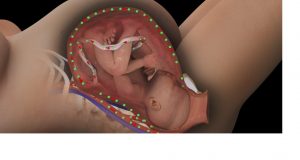 The plaintiff was a 35-year-old mother pregnant with her 4th child and came under the care of the defendant, an OB/GYN at a federally funded health clinic. Doctors who work for federally funded clinics are deemed to be federal government employees which is how this case ended up in federal court.

Even without complete information, the defendant concluded that the plaintiff had a “proven pelvis” based on her prior vaginal deliveries. However, the defendant recognized that estimating fetal weight would be particularly important given the plaintiff’s previous macrosomic birth. To estimate fetal weight, the defendant used his own personal method that he called the “Sicurenza method” after his supervisor during his residency. The defendant’s “Sicurenza method” is not recognized or approved by the American College of Obstetricians & Gynecologists (or any other organization). Even the defendant’s own expert witnesses admitted that they had never heard of the technique.

Using his own “Sicurenza method” the defendant repeatedly estimated the baby’s birth weight would be around 8 pounds. The defendant continued to adhere to this estimate although fundal height measurements (a more conventional measure of fetal weight) suggested the baby might be overly large for its gestational age.

The plaintiff went into labor 2 days after her due date and was admitted to the hospital for delivery. Labor and delivery were complicated by the fact that the plaintiff and her husband did not speak any English. The defendant and the nurses had to communicate everything through an iPad interpreter.

After progressing to full dilation, the plaintiff pushed for over 90 minutes and was becoming physically exhausted. What happened after this point was significantly disputed with both sides offering conflicting testimony. The plaintiff testified that after the 90 minutes of pushing, she told the defendant she was exhausted and asked for a C-section, but the defendant declined her request saying it was “too late” for surgery. By contrast, both the defendant and the delivery room nurse testified that a C-section was offered and vacuum extraction.

At this stage, the defendant used a vacuum extractor to facilitate delivery. As a result, the baby’s head was delivered through the birth canal, but the rest of his body remained stuck. The defendant realized that the baby’s shoulder was stuck behind the plaintiff’s pelvic bone, a dangerous obstetric complication known as shoulder dystocia.

Eventually, another OB/GYN, Dr. Jones, came in to assist the defendant. Dr. Jones had much smaller hands that the defendant and she could fit them inside the vagina and successfully rotate the baby and dislodge the shoulder. At this point, the baby was finally delivered. The baby was macrosomic with a birth weight of 11 lbs. 6 oz., much large than the defendant’s estimated birth weight.

When the baby was finally delivered his heart was not beating, and he was not breathing. He had to be resuscitated with oxygen. Fortunately, there was no apparent brain damage, but the baby’s right arm was noticeably limp. When the baby was 1-month-old, he was diagnosed with a brachial plexus injury causing paralysis of the right arm. The brachial plexus is a collection of nerves at the base of the neck which controls the movement of the arms. During childbirth, these nerves can become damaged from overstretching causing them to rupture.

In most cases, this type of injury can be successfully treated with physical therapy. But the baby’s arm showed no improvement after extensive physical therapy. Eventually, an MRI on the baby’s cervical spine was performed. The MRI revealed that the baby’s brachial plexus injury was the most serious type, known as an avulsion, which occurs when the nerves are actually torn away from the spinal cord. Following the MRI, the baby underwent surgery to repair the damaged nerves. The surgery made some improvement, but the baby would have some permanent paralysis in the arm and require years of continued physical therapy.

Based on the evidence presented at trial, the judge concluded that the defendant breached the applicable standard of care in the following ways:

The judge stated that there was “a plethora of evidence in the record” to show that the defendant’s negligence caused the baby’s injury. First, the judge found that the defendant caused the shoulder dystocia to occur by negligently failing to diagnose fetal macrosomia and opt for a C-section delivery. Second, the judge found that once the shoulder dystocia occurred, the defendant panicked and used excessive force which overstretched the baby’s brachial plexus nerves, tearing them away from the spine.

After concluding that the defendant’s negligent care was the proximate cause of the baby’s injuries, the judge explained each element of damages that the plaintiff was entitled to receive.

The total amount of damages awarded to the plaintiff was $8,297,967.77. In his Memorandum decision, the judge explained that the non-economic damages were comparable to damages awarded in similar brachial plexus injury cases.

In my view, what doomed the defendant was his reliance on his own personal “Sicurenza method” for estimating fetal weight. The key failure was not accurately measuring the baby’s size and weight during pregnancy. Accurate size measurements would have led to a preemptive C-section and the baby never would have been injured.

Estimating fetal weight during pregnancy is notoriously difficult. If the defendant would have used conventional, accepted methods of estimating fetal size (i.e., those endorsed by AGOC) he may have had a viable defense. By using his own personal method that no other doctors had even heard of, the defendant just opened himself up to critical second-guessing. He guaranteed that he would be liable if his fetal size calculations were incorrect and that is exactly what happened.