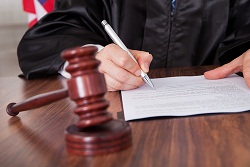 The Maryland Court of Special Appeals handed down an interesting opinion in Asphalt and Concrete Services v. Perry, reversing a half-million dollar verdict.  This case is a cautionary tale for lawyers who want to get every possible thing they can, in order to make the defendant look bad.  I understand the urge, believe me. But sometimes you are just asking for an appeal that will get your case reversed.  This is an opinion every Maryland personal injury lawyer — on both sides of the aisle — should read and keep in the back of their minds.   This case also has some good law and bad law for plaintiffs’ lawyers that is worth knowing.

This case involved a pedestrian accident involving a dump truck.  The Plaintiff was crossing an intersection and stopped at a crosswalk. After seeing the light was green, he started to cross the street.  Next thing he knows, he is in a hospital.

He was taken to Baltimore’s Kernan Hospital’s brain trauma center with a head injury, obviously, and also a severe shoulder injury and rib fractures.  A good rule of thumb is that if you have a P.G. County case, and the client gets sent to Kernan…you have a pretty significant case.

A Prince George’s County jury found the dump truck driver was negligent and that his employer’s employer essentially was negligent in hiring the guy in the first place.  They awarded $529,500 in damages.  I cut short the injury description a little — this guy was in a nursing home for over a month and is struggling to walk now — but I think the defendants got off pretty light here.  Defendants appealed anyway.

What happened was the driver was employed by a company called Higher Power who was hired by Asphalt & Concrete Services.  But Higher Power was anything but a higher power.  It was a forfeited, limited liability company unauthorized to do business in Maryland.  Basically, it seems it was a shell — actually a shell-less — company for the defendant driver.  In fact, the driver did not have insurance for the dump truck or even a license to drive any vehicle, much less a dump truck.  Apparently, his license was suspended for not showing up in court.

This makes the concrete company look awful, right?  They hire a company that is really a guy, without taking the time to figure out whether the guy has car insurance or still has a driver’s license.  Not good.  Obviously, it made sense to hire outside contractors because it is too expensive to hire and train your own drivers.  How do I know that?  Common sense and the fact that the company’s president at the time testified to that at trial.

So the Plaintiff’s attorney sought to admit the evidence because… it makes the concrete company look bad and hopefully that will inflame them to a higher jury verdict (which, again, did not seem to happen here).   The question is whether the lack of a driver’s license and car insurance is admissible at trial.

Plaintiff’s argument was had they made sure he had insurance they would have serendipitously discovered that he had no insurance.   This is true, but the court dismissed this as but/for causation and not the proximate cause.

The target defendant also tried to get out of the case altogether by arguing that there was insufficient evidence of an employment relationship.  But the court said there was ample evidence to go to a jury on these issues.  So this case will get tried again.

My partner Laura Zois and I enjoy trying a case together.  We try to do this every year, although we will not this year.  It is effective — not so humbly, our stats are pretty off the hook — and it is fun.  Some of my best memories at work are the goofy things we say during trial.

Last year, we had this case against Allstate.  They offered $150,000 before trial, which was ridiculous.  Everything in the trial went our way from beginning to end.  Towards the end of the trial, Laura was arguing about which portions of somebody’s deposition — I can’t even remember  — could be admitted at trial.  She was winning the argument — she usually does — but I was thinking I would rule against her it if was me.  So we withdrew the argument and the objections entirely.  When you really think you are winning, there is no sense in creating an appellate point.   This is one of those “careful what you wish for” situations.  I ended up being right, the jury awarded nearly $1 million.  There were absolutely zero grounds for appeal for Allstate.

But there is still a chance for Plaintiff’s attorney (I don’t know who it is) to turn this around and create another “careful what you wish for” outcome.  I think there is a real chance of Plaintiff eclipsing the pain and suffering damage cap in 2012 of $755,000.  Which would mean that the concrete defendant would have to pay almost $300,000 more (the cap plus the medical bills).  If the plaintiff’s injuries are as the court described, this is probably the most likely outcome in Prince George’s County.

The Plaintiff’s attorney got the lack of insurance information through a Progressive adjuster, who was named in the case and her testimony was discussed for a few paragraphs in the opinion.  I really like her, so I called her to make sure she saw it.  This opinion was decided last month.  She deals with scores of lawyers.  No one mentioned it to her.  I wonder how many lawyers actually read these opinions from top to bottom.