Jury Verdict Research found that the median jury verdict in arm nerve damage cases over the last 10 years was $81,095. Arm nerve damage is defined by the study as injuries to the median nerve, radial nerve, ulnar nerve, musculocutaneous nerve, and axillary nerve which are all branches of the brachial plexus. Carpal tunnel injuries were, however, specifically excluded from this study.  Why?  The vast majority of carpal tunnel injury cases are not the result of medical malpractice or a motor vehicle accident.  Before you get outraged, it is absolutely true that people get CPS all of the time from tensing up and gripping the steering wheel before a crash. It is just that most of these injuries are not caused by car accidents. 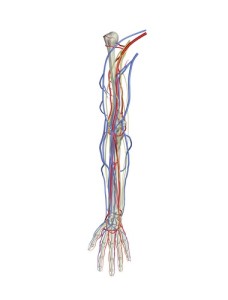 Brachial plexus injuries (also called brachial plexus palsy) are the most common of these injuries that we see in litigation.  This injury usually occurs during childbirth and is often the result of medical malpractice.  The brachial plexus controls the arm, hand, and shoulder muscles.  Brachial means are and plexus is a collection of nerves that are very close to each other in the body. The nerves give out branches to each other.  They are interconnected like a network of wires where every wire has its purpose. The brachial plexus is a series of five nerve roots that come from the spinal cord. The roots are C5, C6, C7, C8, and T1. Each root has an incredible 10,000 fibers.   These fiber-optic cables are called axons. Most brachial plexus injury cases — either birth injury or trauma like a motor vehicle accident — are the result of the head and neck going in one direction and the shoulder going in the other. The greater the separation or stretching, the more severe the injury. If they stretch just a little bit, the insulation can be disrupted, but they bounce right back.  Thankfully, this happens in most brachial plexus injury cases.  If they stretch further, some of those inside fiber-optic cables begin to tear.  The results at this level are mixed.  Some resiliently bounce back and others do not. At some point, the stretch reaches the point where they tear apart in two places.  The worst scenario is nerve avulsion which is a tearing of a nerve from its connection to the spine.  This is like pulling a plug from a socket. The nerve loses its connection to the spinal cord.

The following is a sampling of verdicts and settlements that involve arm nerve damage:

A sprinkler installer was working at a renovation site. He fell through a hole in the building’s ground floor and ultimately landed in the basement. The man suffered multiple fractures to his skull and vertebrae. He also suffered a brachial plexus injury. An ambulance took him to the hospital, where staff administered painkillers. He did not receive treatment for his fractures. The man was hospitalized for nine days and was then transferred to a rehabilitation facility for inpatient physical therapy. He claimed that his brachial plexus injury weakened his right arm. The man underwent nerve-transplant surgery to treat it. He then underwent physical therapy for six months. The man sued the premises’ owner for failing to provide a safe workplace and failed to guard against the opening on the building’s ground floor. This case settled for $2,195,000.

A pedestrian was struck by a vehicle as he was crossing a sidewalk. The impact knocked him about 40 feet into the air. He landed on a grassy sidewalk area, and the car landed on him. The man suffered significant injuries throughout his entire body. One of his most prominent injuries was his mangled right arm. An ambulance took him to the hospital, where staff performed emergency vascular surgery on his arm and leg. They could save his leg, but not his arm. The man underwent an above-the-elbow amputation. He was hospitalized for five weeks after the procedure. His life transformed following his amputation. He lost his girlfriend, his apartment, and his ability to hunt or fish. The man also experienced difficulty doing simple tasks such as tying his shoes or cutting food. He received a $12,037,000 award from the jury. 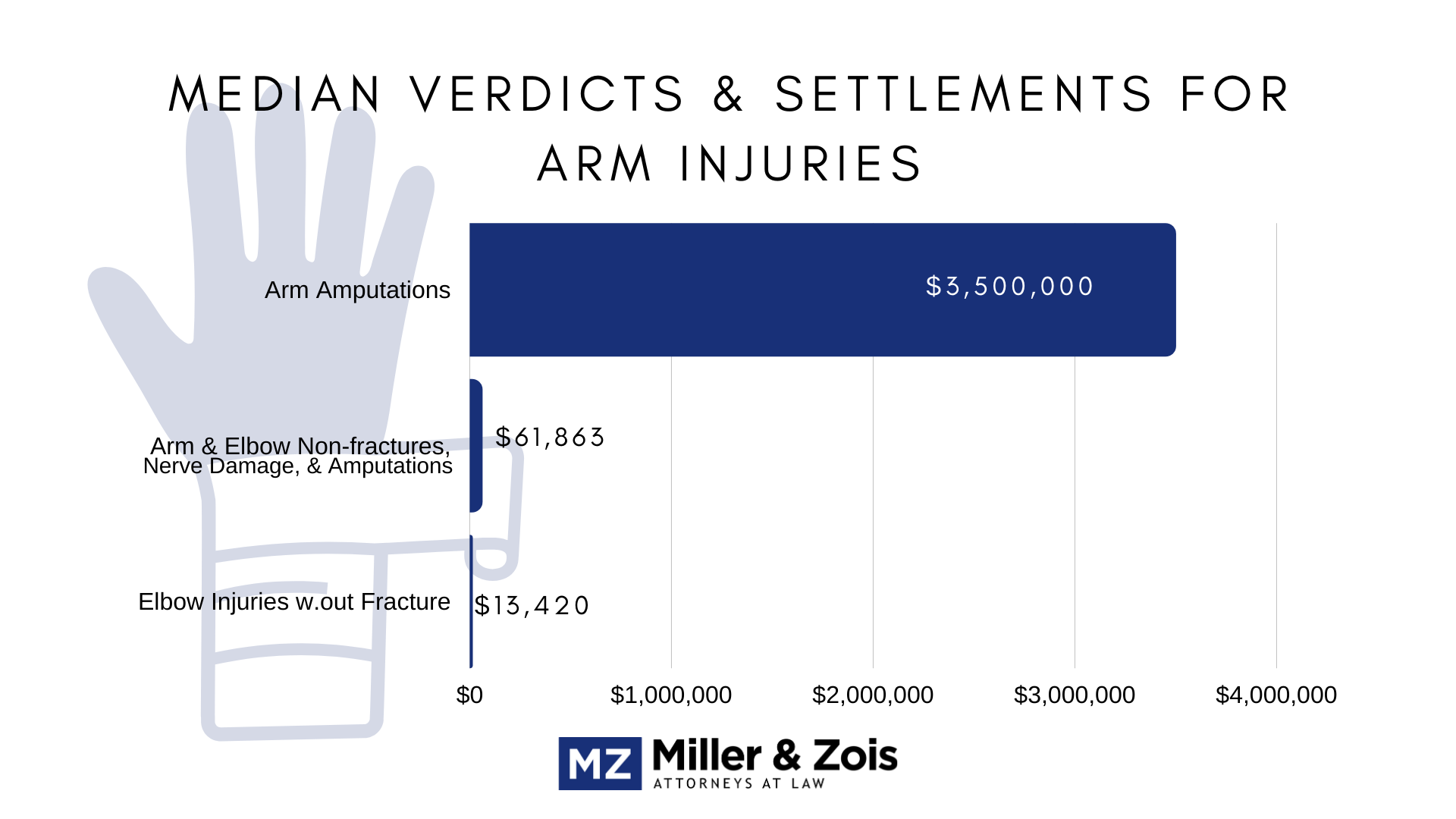 A motorcyclist was struck head-on by a car involved in a two-car drag race on a public road near an industrial park. Besides a brain injury, he suffered severe damage to his right arm and right leg. His right arm was amputated at the scene of the accident. He was then brought to the hospital, where staff diagnosed him with a brachial plexus injury, a traumatic brain injury, internal bleeding, and multiple leg fractures. Doctors then performed 11 surgeries over the course of a few days. This included debridement and wound irrigation. He also received a below-the-knee amputation. His brachial plexus injury prevented him from being able to wear a functional prosthesis. The man now experienced difficulty walking up the stairs, cutting his fingernails, and driving with one arm. He sued the driver for negligence and the industrial park’s owner for allowing dangerous conditions to exist. The jury awarded the man $39,000,000.

A man and his girlfriend were walking in a mall parking lot. He was struck by a vehicle that attempted a U-turn in a loading area. The man claimed that he stepped off the curb and was subsequently struck by the vehicle. The impact threw him onto the pavement. He was brought to the emergency room, where he was diagnosed with a brachial plexus injury, a neck injury, and reduced sensation to his left hand. The man was discharged two days later and was required to wear a Miami J collar. He later sought chiropractic, physical, and occupational therapy. The man received a $44,185 arbitration award.

A dog attacked and bit a 76-year-old retiree. This occurred at her daughter’s home. The woman suffered significant arm lacerations that damaged her left arm’s deltoid muscle and ulna nerve. She underwent three debridement procedures to address her left arm injuries. The woman claimed that her ulnar nerve was permanently damaged, and she now experienced numbness and a limited range of motion. She claimed that her arm can no longer perform daily activities such as brushing her teeth or driving. The woman sued her daughter and estranged husband for failing to control and restrain their dog. A jury awarded the woman $700,000, but she could only recover the stipulated $500,000 limit.