Last week in Lamalfa v. Hearn, the Maryland Court of Appeals held that medical records could be admitted over hearsay objections when the records are relied on by an expert witness and the records satisfy 4 conditions of Maryland Rule 5-703(b).

Like most states, Maryland has a statutory business records exception to the hearsay rule.   The thinking is that businesses — most businesses, anyway — keep reliable records which makes them more trustworthy than other forms of hearsay.  So admitting hospital records into evidence is a common practice in malpractice and other injury and wrongful death cases.

The Plaintiff, Ms. Lamalfa, was injured in a car accident and sued the at-fault driver.  She claimed that she suffered 3 different injuries because of the accident: (1) whiplash injuries to her back and neck; (2) torn rotator-cuff injury to her right shoulder; and (3) abdominal hernia injury.

The most significant injuries were the shoulder and abdomen. Both required surgery.  The problem was that when Lamalfa initially went to Mercy Hospital for treatment after the accident, she said nothing about pain in her shoulder or abdomen.

This is a big problem.  But it happens.  Sometimes the acute injury that you are focusing on trumps the other injuries initially after the crash.  Is it a red flag for the jury you better be able to explain?  You bet it is.

When Lamalfa went for follow-up treatment in the following weeks,  she apparently said nothing about her shoulder at that point either. A bigger problem, right?  The medical records for her initial treatment at Mercy and following up outpatient treatment omitted any shoulder or abdomen injuries resulting from the accident.

In fact, it was not until almost 2 years later that Lamalfa complained about her shoulder and abdominal pain and underwent surgery for both.  We will need new words to explain how big the problem is at this point.  This is a nearly impossible case to win under any scenario.

At trial in Baltimore City, Lamalfa presented expert testimony suggesting that the acute trauma of the accident caused her shoulder and abdominal injuries. However, these experts never saw the records from Mercy or the initial treatment showing that there was no shoulder injury or pain immediately after the accident.

Defense counsel for Hearns presented their own expert – Dr. Halikman.  Dr. Halikman comes with his own set of problems as an expert.  The incredible amount of expert work that he does and the obscene about of money he makes from it has been a source of plaintiffs’ lawyers’ ire for years.

Dr. Halikman concluded that Lamalfa’s shoulder and abdominal injuries were not caused by the car accident, but rather, degenerative conditions from years as working as a hairstylist.  Dr. Halikman’s opinion were largely based on his review of the medical records from the hospital and Lamalfa’s initial treatment in the weeks after the accident.  Specifically, Dr. Halikman explained that if Lamalfa had torn her rotator cuff in the accident, she would have been in immediate pain and the injury would have been apparent.

To hammer home the point, defense counsel offered the hospital and initial treatment records into evidence.  Plaintiff’s attorney objected because these records were inadmissible hearsay.  The trial court overruled and admitted the medical records into evidence under Md. Rule 5-703(b) because they were documents that were relied on by an expert witness in forming his opinion.

Plaintiff eventually prevailed at trial.  Sort of, anyway. She was not awarded damages for her alleged shoulder or abdominal injuries. The jury returned a verdict of $10,576.05, which included the full amount of the medical bills for the whiplash injury plus $650.00 for non-economic damages.

When a Baltimore City jury awards $650 in pain and suffering damages for nearly $10,000 in medical bills, the jury is saying that they really did not like your case.  At all.

So the plaintiff’s attorney contended that the medical records should not have been admitted and appealed.    The truth is, the admissibility of the records likely had little to do with this verdict. 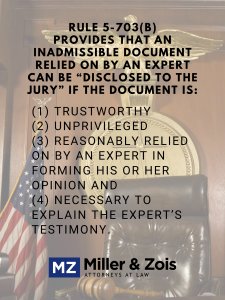 So at issue before the Maryland Court of Appeals is the scope of the hearsay exception.  Rule 5-703(b) provides that an inadmissible document relied on by an expert can be “disclosed to the jury” if the document is: (1) trustworthy; (2) unprivileged; (3) reasonably relied on by an expert in forming his or her opinion; and (4) necessary to explain the expert’s testimony.

Lamalfa’s argument on appeal focused on the meaning of the phrase “disclosed to the jury.”  According to Lamalfa, the satisfaction of Rule 5-703(b) should not make inadmissible documents admissible. Lamalfa contended that if inadmissible documents can become admissible because an expert witness relies on then it would create an “end run” around the hearsay rule.

Instead, Lamalfa suggested that Rule 5-703(b) only permits inadmissible documents to be discussed or shown to the jury during expert testimony and not fully admitted as evidence.

The Court of Appeals rejected Lamalfa’s argument and held that if a document satisfies all 4 elements of Rule 5-703(b) it can be fully admitted into evidence at the trial court’s discretion.  In explaining the basis for this decision, the Court first addressed the language of Rule 5-703(b).

Specifically, the Court concluded that the phrase “disclosed to the jury” in Rule 5-703(b) effectively means “admitted into evidence.”  The Court based this language interpretation prior case law and Advisory Committee Notes for Rule 703 of the Federal Rules of Evidence.  The Court noted, however, documents admitted under 5-703(b) should not be admitted as substantive evidence.

Rather, they are admitted for the limited purpose of evaluating the expert’s opinion.  As such, the Court stated that documents admitted under 5-703(b) can be accompanied by a limiting instruction.

Based on this decision, the Court ruled that Lamalfa’s hospital and initial treatment records satisfied all 4 elements of Rule 5-703(b) and were therefore properly admitted into evidence.

Medical records are hearsay because the health care providers are making the statements via there documentation that they are not providing in court under oath. But states have universally created a medical records hearsay exception.

How Were the Medical Records Admitted in this Case?

Here is how medical records were admitted in evidence in court in this case after a defense objection during the defendant’s expert’s testimony.

THE COURT: Thanks.  Objection’s overruled. So admitted. It’s being relied on by this expert in his review and opinion.
[Your] objection is noted. However, the Court overrules the objection and allows its admission. As the witness testified that he reviewed this and relied on it in reaching his opinion. Thank you very much. Have a seat.

What This Ruling Means

Considering this case, Maryland personal injury attorneys may struggle to use the hearsay rule as a shield against the admissibility of unfavorable post-accident medical records. I guess defense counsel can now make these records admissible by having their own experts review and rely on them.  If plaintiffs’ counsel wants to avoid this, they need to be fully prepared to battle over the 4 elements of admissibility under 5-703(b).

Instead of raising a hearsay objection at trial, a well-prepared plaintiff’s attorney should move to exclude these from evidence in advance based because they do not meet the requirements of Rule 5-703(b).  We can make an argument that the records are not “trustworthy” and/or that they are unnecessary to illuminate the defense expert’s opinion.  If all else fails the plaintiff’s counsel should at least request that they are admitted with a limiting instruction.

No one is arguing that the expert cannot rely on these records.  The question is whether they should be admissible. I would just like a simple rule.  I’m fine with a rule that admits all the medical records into evidence.  Most judges will let these records come in, anyway, even before this case. My problem is having one rule in one case and another rule in another.  There should be a bright-line rule.

This was not a good case for the plaintiff.  I don’t think the admissibility of the medical records had anything to do with the outcome in this case.  You can’t wait years to complain of injuries and have a jury attribute them to the crash, no matter what your expert says.