The Wall Street Journal reported yesterday that plaintiff’s attorney Marc Bern sued Random House in U.S. District Court in Manhattan alleging that his clients purchased James Frey’s now-famous “A Million Little Pieces.” Plaintiff’s attorney stated that they based the claim for failure “to conduct a reasonable investigation or inquiry regarding the truthfulness or accuracy” of the material. Bern said he will seek a mere $50 million in damages, presumably for the “pain and suffering” of reading a book they thought was non fiction. (This case eventually settled, and some people got their money back on the books.  There were no pain and suffering damages.  And the lawyers probably made a lot of money off a weak case.)

Why Am I Writing About This on a Personal Injury Blog?

My feeling is that this claim is worth about fifty cents on its best day and lawsuits like these do personal injury victims and their attorneys a disservice. They feed into a wave of popular anger over lawsuits, leading people to believe that recoveries for this type of “tort” are commonplace when they are not.

Stores of million-dollar recoveries in cases that never happened fuel this frustration. My favorite is the man who, assuming his Winnebago would drive itself, set the cruise control at 90 mph, left his seat and went to make a cup of coffee, and then sued and recovered millions because he was not warned that cruise control did not mean the vehicle would drive itself. The other great “myth” is the McDonald’s coffee case, which has been so distorted that the case’s facts have been long lost. For the facts of that case, click here.  You note that the car accident happened over 20 years ago now, the plaintiff is now dead, and the court cut back her jury award, anyway.

These Fox News sexual harassment settlements further underscore this problem.  Bill O’Reilly settled his sexual harassment case for $32 million.  I’ll bet O’Reilly probably made that woman suffer someone awful for a settlement that high.  But there is no way on earth she gets that recovery from a jury.  O’Reilly paid a many-fold premium to keep the allegations quiet.

People are getting bombarded with these verdicts.  How long has it been since Gretchen Carlson’s $20 million sexual harassment settlement with Fox News?  This is wildly higher than what Maryland families get in an average wrongful death case.  This is the money you get in the very biggest birth injury cases where the child’s life is destroyed.  Even then, the child receives less than a million dollars for pain and suffering.  The money in those cases goes towards the expected cost of future medical care.  Does that average perspective jury think of the insanity of birth injury awards being as low as they are or do they think about these Fox News sexual harassment lawsuits?  I fear it is the latter.

How This Affects Personal Injury Cases

Our team at Miller & Zois fighting every day to recover fair compensation for our clients. To do this, directly or indirectly, we have to ask jurors for financial compensation for a victim’s injuries. It is (near) impossible to accomplish this task if a jury does not believe not only in the client but in his or her lawyer. Lawyers asking for $50 million in damages because his “clients” read a book they thought was non-fiction, does not help personal injury lawyer’s credibility with a jury.

A wonderful thing that Maryland did, after this post, was to change the rule so that lawyers may not ask for a high damage amount in the Complaint.  Why?  For the very reason we are battling here.  That someone should get millions of dollars for reading a book filled with lies is the same as someone who has lost their family because someone got drunk and crossed the double yellow line and got them killed. 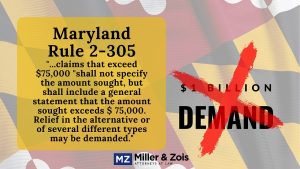 What Is the Solution?

Besides changing the law as Maryland has already done, there is no other solution.  Celebrity lawsuits, insane lawsuits, Freddie Gray, and anomalous verdicts will always define plaintiffs and plaintiffs’ lawyers and jurors will come in with preconceptions about us.  Our job is to overcome them.

Let’s close this with a quote from our friend James Frey taken from “A Million Little Pieces.”

“Live and let live, do not judge, take life as it comes and deal with it and everything will be okay.”

I guess it was not all fiction.