One of the largest malpractice verdicts in Maryland history was handed down yesterday by a Baltimore City jury that awarded $55 million in a cerebral palsy medical malpractice case. The actual award will be reduced by Maryland’s medical malpractice cap to less than $30 million. Hopkins is expected to appeal. I’m not sure of the grounds, but in a complicated birth injury case, there are always potential issues.

Plaintiff’s lawyer said after the verdict that the parents are “relieved that they’re going to have the economic resources to take care of their child, not only for their own natural lives but for their child’s.” This is the big fear of almost any parent in a birth injury case. When I/we die, who will take care of my child? It must be one of the worst fears imaginable.

2013 Update: This verdict was reversed.  This case settled before it was re-tried.

Cerebral palsy refers to any one of several neurological disorders that alter body movement and muscle coordination.  The condition is permanent, but it does not worsen over time. The cerebral palsy often travels with disturbances of cognition, coordination, perception, communication, and behavior. Cerebral palsy victims also often have epilepsy, seizures, secondary musculoskeletal problems, and altered sensation.

Other disorders that are often found in children with cerebral palsy include vision disturbances, oral motor dysfunction (swallowing, chewing, sucking), and asymmetry of linear growth.

Neurologic classifications of cerebral palsy include spastic (the most common) dyskinetic, and ataxic.  The spastic CP has 5 types:

Most cerebral palsy cases are diagnosed before the child reaches age 2.  This is a problem for Maryland birth injury lawyers because the statute of limitations is, arguably anyway, three years on the parents claim, which includes past and future medical treatment and care before the child reaches 18.  When you prepare a CP case correctly, you need a lot of time to put it together, and sometimes conflicted parents hold on to these claims for years before calling an attorney. 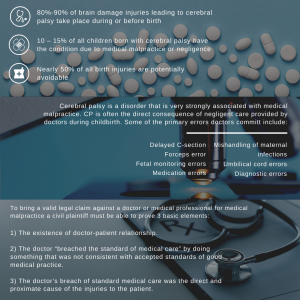 If you look for information about cerebral palsy online, you will find a ton of information from lawyers.  Most of it is cut and paste nonsense from other websites.  But you will find a ton.  Why?  Cerebral palsy cases may be the most lucrative type of personal injury case.  This is because the cost of caring for a child with cerebral palsy can quickly reach tens of millions of dollars over the course of a lifetime, not to mention the large pain and suffering awards that these cases can receive from a jury.  Our law firm handles cerebral palsy cases.  Most law firms advertising for cerebral palsy cases do not.  So why are they so hot to trot to get these cases?  They are hoping for a fee split with the lawyer to whom they refer the case for handling.  Even a percentage of just one of these cases can be a significant amount of money.  So if you are a criminal defense lawyer and you get a cerebral palsy birth injury case, you refer it out (to lawyers like us) and you can make more money off it, and the next thousand criminal cases that you have.